Over the past two weeks, the six senior art majors created two exhibits to showcase artwork from their time as students.

Julio Suarez, assistant pro­fessor of fine arts at Hillsdale College, dis­cussed the impor­tance of senior art shows as a cul­mi­nation of stu­dents’ growth over the past four years.

“Having a deadline and the respon­si­bility of putting on a show is very good for student’s pro­duc­tivity and artistic growth,” Suarez said. “It is also extremely rewarding to see their work in a pro­fes­sional setting with the proper pre­sen­tation and lighting.”

Both groups were tasked with estab­lishing a theme for their shows, some­thing that encap­su­lates the work of all three artists. Linde explained how her group came up with the theme “Learning to See.”

The “Eternal Fem­inine” was estab­lished in a similar way, with Gage proposing the idea as a way to unite the very dif­ferent styles of these women’s art.

“I threw out the idea of the eternal fem­inine because it was some­thing I was inter­ested in. It slowly turned into a theme and we were able to research and explore the meaning of the term and how it was dis­played in our work,” Gage said.

Both shows had an opening night reception where the artists were able to discuss and showcase their art together. Cool said it was one of the best nights of her college expe­rience because of the com­munity she was sur­rounded with.

“It was awesome seeing people’s faces as they looked at my art and wan­dered around the gallery,” Cool said. “A lot of the work art majors do is silent, just because the department is on the out­skirts of campus. Our department is amazing, so it was cool seeing it get the recog­nition it deserved.”

Gage explained all the work that goes into setting up the shows; stu­dents are expected to select, frame, price, and display about 30 pieces of original art created during their time at Hillsdale College.

Gage explained the shows weren’t perfect, but the artists received lots of grace from peers and professors.

“I made a couple of mis­takes in my graphic design, or the framing wasn’t perfect, or there was a scratch on one side. That’s always kind of daunting, but at the same time, it’s so much work,” Gage said. “It’s a funny human moment, when you don’t notice a mistake you’ve made, other people also tend not to notice, so people were very understanding.”

Petersen said that all art majors are con­nected to dif­ferent areas on campus, so these shows give oppor­tu­nities for stu­dents to come together and appre­ciate the beauty created by seniors.

“To be a well-rounded liberal arts student, you need to expose yourself to the dif­ferent sides of campus. You need to go to bas­ketball games, attend theater pro­duc­tions, and see what other stu­dents are doing,” Petersen said. “Take the time to witness objective beauty and support your friends.” 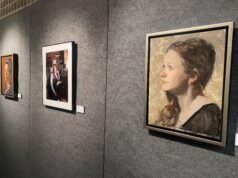 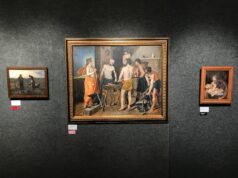 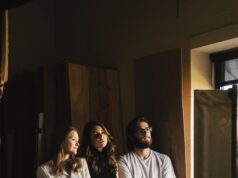