Betty Bisel, 96, lives on Summit Street in a small, red cottage hidden beneath the shade of several oak trees and marked by several small plastic lawn geese. Inside, the house’s age is hidden by trinkets and antiques from a bygone era. The living room is rem­i­niscent of a 1960s sub­urban home with white cur­tains yel­lowed with age, a bur­gundy shag carpet, and floral pink wallpaper.

“I’m not a hoarder, I’m a col­lector,” Bisel said with pride.

Bisel has lived a full life trav­eling the world, raising her children, and working at Hillsdale College for more than 20 years before retiring in 2008.

Bisel moved to Hillsdale with her children and husband Walter in 1959 and worked at the old Sears store on West Car­leton Street for 21 years until it closed. Bisel then applied to Hillsdale College, which was a long shot since there were no open postings. On the same day, she went to donate blood with a friend who invited Bisel to join her on a trip to the Holy Land.

“She turned around and she said to me, ‘Why don’t you sign up and go with me?’” Bisel said. “I was like, ‘Okay!’ So we signed up to take this trip. And then when I came home that day, they called me from the college and offered me a job at the Dow.”

Bisel delayed her employment at the college for a chance “to walk where Jesus walked.” She said in Israel she saw the sights, took com­munion, and sung hymns atop Mount Zion. Bisel said vis­iting the Holy Land was a trans­for­mative expe­rience for her faith.

“I said every min­ister should go and take that trip,” said Bisel.

After her trip, Bisel returned to Hillsdale as a recep­tionist for the Dow Lead­ership Center in 1985. There, she left an impression on many stu­dents and visitors.

One alum, Michael Fanning ’92, men­tioned Bisel in a letter to former Pres­ident George Roche as someone who he valued as a con­stant presence in the Dow Center.

Hanging proudly in Bisel’s living room is a water­color painting of an Italian village titled “Amalfi Drive.” Bisel pur­chased the painting when it was on display in the Dow Center during an exhibit for Pro­fessor of Art Sam Knecht. Bisel said she was trans­fixed by its beauty, reminding  her of a trip she had taken to Italy with her husband when she was “a younger woman.”

One day, while she was admiring the painting, Knecht approached her from behind and asked if she would like to buy it. Bisel said she was shocked that he was willing to sell it and couldn’t help but place a bid. Knecht sold her the piece for $250.

Bisel worked at the Dow Center for 10 years before retiring. She would not stay retired for long, however.

“I said to John Coonradt, ‘If you ever need any help, call me.’ He called me,” said Bisel.

Bisel served as the Simpson house director for the spring semester of 1998. She worked with Dean of Men Aaron Peterson and Director of Health Ser­vices Brock Lutz while they were still Res­ident Assis­tants.

“My mem­ories of Betty were how sweet she was and took every­thing in stride, even though Simpson boys were of course Simpson boys,” Lutz said in an email. “When my car was pranked by putting 800 pounds of feed corn in my little Ford Festiva by someone from the school I was doing my student teaching at, I remember her being very amused by that.”

In 2000, Bisel was asked to move to Chi Omega by former Dean of Women Carol Ann Baker. Bisel said she remembers gath­ering in the living room on 9/11 to watch the T.V.

“Everyone’s eyes were glued to the T.V.,” said Bisel.

Bisel posted on her bedroom door a poster the women of Chi Omega gave her during Thanks­giving to thank her for her kindness.

After a year at Chi Omega, Bisel was asked to move to Kappa Kappa Gamma sorority to serve as house director. There, she con­tinued her tra­dition of helping stu­dents with a cheerful and upbeat attitude. Fol­lowing her year at Kappa Kappa Gamma, she retired again until a friend she met working at the Dow offered her a part-time job working reception at the George C. Roche Sports Complex.

“My friend asked me: ‘Do You know someone who would like to work part-time at the Sports Complex?’ I said ‘I would!’”

After seven years working at the sports complex, Bisel decided to leave to take care of her husband.

“One morning I woke up and thought of John Wayne’s ‘A man’s gotta do what a man’s gotta do,” Bisel said. “So I called up the coach and said ‘My husband is sick and my son has cancer. I have to leave.”

Bisel returned home and took care of her husband until his death in 2013. Her son died a year later.

Throughout all these hard­ships, Bisel has remained a pillar in the com­munity, according to Pastor Sean Willman of St. Paul’s Lutheran Church.

“I’ve come to find out that Betty is loved and admired by so many. College stu­dents, coworkers, peers, and friends all get the same caring and loving treatment from Betty,” Willman said in an email. “She’s a blessing to our com­munity at St. Paul’s, and her faith­fulness is a tes­tament to her love of God and neighbor alike.” 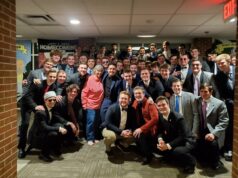 ‘I get to watch them grow .… and I still see the freshman in them’ 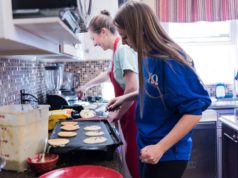 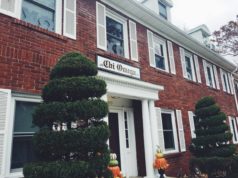 Chi Omega to host Chili Cook Off on Sept. 27