MSP troopers arrested 29-year-old Kyle Bertok and 44-year-old Larry Estel in exe­cution of a search warrant, according to Cmdr. Sean Street of the Region of Irish Hills Nar­cotics Office, a division of the MSP.

Police searched Bertok’s res­i­dence on the 9800 block of Cran­berry Lake Road north of  Jonesville where they seized metham­phet­amine and several pistols, a press release said.

For safety reasons, troopers waited until Bertok left the property to pull him over and arrest him, according to Street. Estel was in the same vehicle and allegedly in pos­session of meth, Street said, so officers arrested both men before searching the property.

Bertok faces two weapons charges, three driving charges, and a charge for meth pos­session, according to Jail­Tracker. Bertok also faces a charge for pre­vi­ously failing to appear in court.

Estel faces a charge of car­rying a con­cealed weapon, along with a meth pos­session charge, according to JailTracker.

Detec­tives from RHINO worked with an emer­gency support team, state troopers from Jackson, and a K‑9 unit to conduct the raid, according to a press release.

“I was away from the scene at another sit­u­ation related to the search warrant, but arrived shortly after the EST team made their entry and secured the indi­viduals there,” Street said.

After Street arrived on the scene, he said he found many indi­viduals were cooperative.

“Everybody that was at the location not related to the suspect was very coop­er­ative, very cordial. They asked about their rights, which is out­standing to hear,” Street said. “It was a good back-and-forth. They’re part of the com­munity, but unfor­tu­nately they were involved in a problem that somebody else brought to them.”

“We do have sus­pi­cions on larger net­works, and we’re trying to see where the people that we bust fit into the larger net­works,” Street said. “So no spe­cific infor­mation, but there’s no doubt in my mind that it is linked to a larger operation.”

RHINO focuses on both low-end and high-end drug dealers to piece together drug traf­ficking net­works, according to Street.

“Every time that we do a search warrant, we retain a little more infor­mation on that suspect, and that leads us to larger targets,” Street said.

This oper­ation was part of a larger effort to prevent crime in the Hillsdale area, according to Street.

“We wanted to be proactive,” Street said. “A lot of the nar­cotics lead to violent crime, theft, all that good stuff – so I really wanted to set the bar on it before it gets out of control.”

Police ask that anyone with infor­mation on drug activity call RHINO at 517 – 265-5787. Callers may remain anonymous. 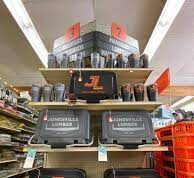