Cody Strecker is an assistant pro­fessor of the­ology. This interview has been edited for length and clarity.

If you could have an uncon­ven­tional pet, what would you choose?

Growing up I always wanted a monkey, but that sounds really messy now.

What are your hobbies?

I love to go for dis­tance runs and playing Lego with my kids.

What is one piece of common knowledge you learned way too late in life?

I still have trouble imme­di­ately knowing which one is called a fork and which one is a knife. Half the time I call it the wrong thing.

Who is one famous person or his­torical figure you look up to?

As a kid, I was entranced by David Liv­ing­stone, the explorer and missionary.

Do you have any con­tro­versial food opinions?

I hate ketchup. To my knowledge, I’ve never eaten any and it makes me dis­gusted even to think about, which is a problem because my kids love it.

Did you have any favorite ’90s toys or video games growing up?

Pogs. I still wish I had my slammer.

Has anyone ever played a really good prank on you?

My room­mates in college hid some Chinese food at the bottom of one of my drawers, but it had so much MSG in it that it never smelled and I didn’t know about it til the end of the school year. They just got frus­trated and pulled it out.

What is one memory from your college years that stands out to you?

I won second place in the Hillsdale Idol com­pe­tition, singing with a friend the “Aladdin” song “A Whole New World,” dressed up as Jasmine. I got carried in on a flying carpet.

What is the most mem­o­rable gift you’ve ever given or received?

Does a wedding ring count? I don’t wear any other jewelry, but I do love my ring.

If you were stranded on a desert island, which  three books would you like to have with you other than the Bible?

What is some­thing funny or sweet one of your kids has said to you?

My two year old has watched a little too much “Daniel Tiger” and thinks he is Prince Wednesday and calls me King Friday every day when I come home from work. “King Friday, you came back!” He thinks his bedroom is his castle.

What is one movie you think everyone should watch?

What is your favorite Bible verse?

Gala­tians 4:6. “God has sent the spirit of his son into our hearts, crying ‘Abba, Father!’”

What is one his­torical place you’d like to live in for a day?

Paris in the 1920s. All of the artists and philoso­phers and the­olo­gians and general culture — it was pretty mirac­ulous who was interacting.

What is one thing a lot of people don’t know about you?

What is one piece of advice you try to live by? 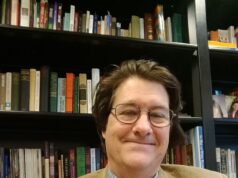 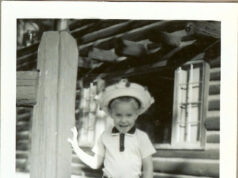