Med­icine can soothe excru­ci­ating pain, CT scans can spot cancer early, and ultra­sounds allow mothers to see and connect with their baby while they are still in the womb. These rev­o­lu­tionary advance­ments have helped many people and brought about much good. But medical pro­fes­sionals should not treat a natural human expe­rience as a medical procedure.

Humans are the only animals that doubt their ability to give birth unas­sisted. Too many women have been told the lie that they are inca­pable of deliv­ering their baby without medical assis­tance, even with a low-risk preg­nancy. This mis­con­ception has led to sky­rock­eting birth trauma, It has become common, but it should be a rarity. The idea of a home birth is often scoffed at, but it offers many irre­placeable benefits.

Many women give birth in hos­pitals and have a beau­tiful expe­rience — the doctors were accom­mo­dating and every­thing went smoothly. My own mother delivered all five of her children via Cesarean section in a hos­pital. Women should know about all of their birthing options, so they can make the decision that will be best for them and their baby.

According to PubMed Central, 45% of women expe­rience birth trauma, and 98% of women in America give birth in hos­pitals. So, there is birth trauma occurring in hos­pitals, and it is important for women to know the risks of a hos­pital birth before they commit to it. Birth trauma can be caused by many things like a failed induction, over use of delivery drugs, or an unnec­essary c‑section. Home births present the oppor­tunity to give birth free of drugs, and a lessened chance of having a failed induction or c‑section.

When one is planning on a hos­pital birth, there is usually a certain timeline laid out, whereas a home birth fully depends on when the baby is ready. If a mother who plans to give birth in a hos­pital goes past her due date, she will most likely be induced. Although there are times when an induction is nec­essary for the safety of the baby and the mother, many times these induc­tions are per­formed before the baby is ready, which can lead to unnec­essary c‑sections and more painful expe­ri­ences in general. According to Mayo Clinic, 25% of first time induc­tions will fail and most times result in a c‑section.

An induction is usually per­formed when the mother has been pregnant for more than 40 weeks, but some are per­formed before this. However, “full term” really means about half of women will give birth before 40 weeks, and half after. Standard due date cal­cu­la­tions come from an obste­trician in the 1800s named Franz Karl Naegele. This cal­cu­lation starts with the first day of one’s last men­strual cycle, goes back three months, then adds one year and seven days. This cal­cu­lation is based off the assumption that every woman has a 28-day men­strual cycle and ovu­lates on day 14 of their cycle. Since all women have dif­fering or incon­sistent cycles, the 40-week due date does not apply to all women. Back when Naegele came up with this rule, it was thought of more as a “guess date” rather than a strict eviction notice. But since our world is cen­tered on con­ve­niency and money, this 40-week “guess date” has turned into some­thing it is not meant to be.

A home birth allows the baby to be born at the natural time, leading to a more com­fortable birth and the lessened like­lihood of medical inter­vention. There is also the comfort aspect of birth, which has a large impact on a mother’s ability to cope during delivery. If a mother is in a com­fortable setting, she will have a much easier time giving birth. Mental readiness has the biggest effect on physical readiness, and if a mother does not feel com­fortable, she will most likely expe­rience more pain, or failure to progress, which will increase her chances of an induction or a c‑section.

Many claim that babies are more likely to die in a home birth since there is no doctor present and there are fewer resources available. Yet, according to a study reported by Reuters, the like­lihood of a baby dying during a home birth is only 0.07% higher than a hos­pital birth. This study involved almost 16 million infants over the course of four years.

Not only does a home birth provide a more com­fortable envi­ronment and less medical inter­vention, but it is also more affordable. According to parents.com, giving birth in a hos­pital can cost up to $11,000, and for a c‑section, the price can reach $14,500. This does not include extra costs if a com­pli­cation arises during birth. For a couple having their first child or expanding their family, the last thing they should have to worry about is the price of delivery. The average cost of a home birth is about $6,000, according to parents.com. Of course this price varies depending on mid­wives and doulas, but it is almost half the price of a hos­pital birth regardless.

Hos­pital births can offer doctors and mul­tiple nurses, which bring comfort and assurance to many women and may be worth the extra money. But, a home birth offers many irre­placeable ele­ments in a dif­ferent way. Mid­wives offer an  abun­dance of knowledge about birth and the human body. There are also doulas, who offer emo­tional support and comfort. A home birth also offers some­thing money cannot buy — to be in the presence of family and in an envi­ronment that is your own as you bring new life into the world to be the very first one to hold your baby and share a con­nection with them. To imme­di­ately get to be home with your child and not have to wait until the doctor releases you from the hospital.

Birth is some­thing mirac­ulous, no matter how it is per­formed. Whether it is via c‑section, nat­u­rally, or with an epidural, every birth is just as beau­tiful as the next. Mothers should be edu­cated on all of the options available for birth, and they should not be told they are inca­pable of doing it on their own. It is an insult to doubt women’s capa­bility of doing what they were created to do. Whether it be a home or a hos­pital birth, a mother should be com­forted, lis­tened to, and trusted that she knows what is best for her baby. Letter to the Editor: Heed the curse, lest we forget 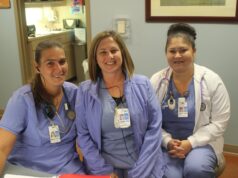