Sopho­mores Brennan Cim­peanu and Sean Barstow jumped up the ITA rankings as the Hillsdale College men’s tennis team returned from their Florida trip against two of the top teams in Division II to begin their G‑MAC play by defeating Ashland Uni­versity 5 – 2.

The Chargers began their spring break facing off against third-ranked Saint Leo Uni­versity, falling 6 – 1. Sophomore Brennan Cim­peanu delivered the singles victory for the Chargers, defeating the No. 13 singles player Bruno Faletto 1 – 6, 6 – 1, 10 – 8. Cim­peanu is 4 – 2 against top 50 ranked players this season.

“It was def­i­nitely a tricky match,” Cim­peanu said. “It was our first match outside since October so it took some time adjusting.”

Cim­peanu said patience turned the match around after dropping the first set.

“As a very aggressive player, I try to use my forehand as a weapon and go for winners,” Cim­peanu said. “However, con­sid­ering the con­di­tions and the fact that I was not feeling my shots just yet, Coach Turner and I decided to switch to a more patient approach which ended up working out for the rest of the match.”

Against Florida Southern College, sophomore Sean Barstow delivered the only victory in another 6 – 1 defeat, winning No. 3 singles 3 – 6, 6 – 4, 10 – 6. Barstow and junior Tyler Conrad won 6 – 4 at No. 1 doubles but the Chargers could not secure the doubles point.

“Playing tough teams like St. Leo and Florida Southern does nothing but help us for the rest of the year,” Head Coach Keith Turner said. “We won’t be playing any teams of that level the rest of the regular season.  Brennan showed that he can beat anyone in the nation with his win over St. Leo. Tyler and Sean are playing great doubles and have proven that they are a true No. 1 doubles team”

The Chargers then moved to the in-con­ference portion of the season, looking for a spot in their fourth-straight G‑MAC Tour­nament, which the top four teams in the con­ference make at the end of the regular season. Against Ashland, the No. 1 doubles team of Barstow and Conrad won 6 – 4, while Cim­peanu and sophomore Daniel Gilbert won 7 – 6 (1 – 0) at No. 2 doubles to take the doubles point.

“Sean has been playing great,” Turner said. “He might be the most tal­ented player on the team. He just needs to have the con­fi­dence that he can beat these players from these strong schools. Nobody wants to play Daniel. He rarely makes mis­takes and drives oppo­nents crazy. On any given day, Daniel can beat anybody.”

“Playing great obvi­ously helped me win but it also gave me some con­fi­dence that carried through the Ashland match where I helped us get the win,” Barstow said. “Hope­fully the team and I can con­tinue to play well and do well in the upcoming con­ference matches.”

Due to their work over the past three matches, Cim­peanu and Barstow leapt up from 31st to 8th in ITA Division II national doubles ranking. Cim­peanu also jumped up to 9th in singles rankings.

“It is def­i­nitely crazy to even be ranked in the first place,” Cim­peanu said. “But it’s such a blessing to be ranked and to see my name and my school’s name on the ranking. I feel honored to be able to rep­resent Hillsdale and to make Hillsdale known around the country in the tennis com­munity. Coming into Hillsdale, I didn’t even know the ITA Cup existed let alone knowing I had the pos­si­bility to be ranked top 10 in the nation.”

“It’s probably the best part of the season,” Cim­peanu said. “We were all training and looking forward to this part. We had a great start taking down Ashland for the first week and I know the guys will con­tinue to put in an insane amount of effort to take down the rest of the teams. The main thing for us is to stay healthy and to keep our energy up during the matches.” 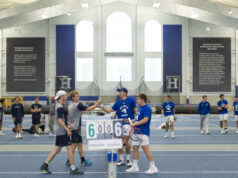 Chargers atop G‑MAC with 3 – 0 conference record 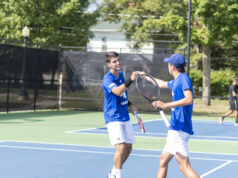 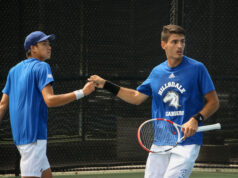