Junior forward Patrick Cartier made history yet again, becoming the first player in program history to earn first-team All-American honors as the Hillsdale College men’s bas­ketball team made the NCAA Division II Elite Eight for the first time in program history before falling to the No. 2 ranked Indiana Uni­versity (Penn­syl­vania) 67 – 55 Tuesday, March 22 at the Ford Center in Evans­ville, Indiana.

After making the Sweet 16 for the first time in program history last year, the Chargers made the NCAA Tour­nament again this year, securing the No. 3 seed in the Midwest Region. The team went on a three-game win streak, doling out revenge on their way to the first Regional Title in program history.

Cartier added to his record-setting list of career achieve­ments along the way as the National Asso­ci­ation of Bas­ketball Coaches and the Division II Con­ference Com­mis­sioners Asso­ci­ation named him to the All-American First Team. Unlike the NABC, the D2CCA dis­tin­guishes between All-Amer­icans, giving out first-team honors to Cartier and four other players, after he was named to the third-team last season.

“It’s very cool to receive the award,” Cartier said. “Obvi­ously right now I haven’t taken much time to think about the season as a whole because we just lost. I think in a couple weeks it will set in, every­thing we accom­plished this year and how we have carried on the tra­dition of Hillsdale bas­ketball in the right way.”

He was also named the Midwest Region Player of the Year by the D2CCA, becoming only the second Charger to ever win the award, joining Kyle Cooper who won in 2015 – 16. He was also named one of the 25 finalists for the Bevo Francis award for the best non-DI men’s bas­ketball player in the nation.

“Reality is, Cartier is special,” Tharp said. “He’s a great player, not to take any­thing away from his team­mates or the program as a whole. But you want to talk about a humble superstar, that’s what Patrick Cartier is. He defines what a student athlete is and he works hard every day. If he’s your best player and he’s the type of person he is, good things are going to happen.”

The Chargers began their tour­nament run against the No. 6 seed Cedarville Uni­versity Yellow Jackets, who had knocked them out of the G‑MAC Tour­nament a week prior. Hillsdale pulled away late to secure a 68 – 61 win to send the Chargers to the round of 32.

There, the Chargers faced another familiar foe in the Ferris State Uni­versity Bulldogs, who had handed Hillsdale its first loss of the season in an 89 – 58 trouncing in November. Hillsdale’s revenge tour con­tinued as it grabbed a 90 – 74 win over Ferris, clinching back-to-back Sweet 16 berths for the first time in program history. Cartier scored a game-high 30 points and added team-highs in both rebounds and assists, with nine and five respec­tively. Junior guard Jack Gohlke dropped 21 points on five made threes, more than the entire Ferris roster combined.

Cartier had another game-high, this time with 23 points, to give the Chargers the Midwest Regional Title and a trip to the Elite Eight in Evans­ville. Junior guard Kyle Goessler and Gohkle com­bined to score 31 points, each adding three assists as well.

After the final eight teams were re-seeded, the Chargers were given the 7th seed, set to face No. 2 IUP. The Crimson Hawks, who haven’t lost since Jan. 26, stifled the Chargers offen­sively, holding them to just 35.8% from the floor and 13.8% from three.

“Their ball pressure really took some of our timing away,” Head Coach John Tharp said. “We did have some looks but they were crowding Pat and we missed some oppor­tu­nities, but the ball pressure was really the key to their defense.”

To start the second half, IUP went on a 10 – 2 run, led mostly by junior guard Dave Morris, who ended with 21 points on 50% from distance.

Cartier led the Chargers in scoring once again, with 18 points on 7 – 10 shooting to go along with five rebounds.

“In a couple weeks we’ll be able to look back and be proud of what we’ve done but obvi­ously tonight was tough, shots weren’t falling for us,” Cartier said.

The loss gives the Chargers a 23 – 8 final record for the season, marking the eighth time in the 122-year history of the program that the team has won at least 23 games in a single season.

“It’s been a wild ride,” Yarian said. “Obvi­ously it’s had its ups and downs but that’s any college kid. I’ve played well some­times and played poorly some­times but Roundy’s always had my back. That’s one thing I love about him, it’s never turning the other cheek toward me, he’s stuck with me and I’ll appre­ciate that for the rest of my life.”

Both Yarian and fellow fifth-year senior Tavon Brown, staples of Hillsdale Charger bas­ketball, have now ended their careers with Hillsdale.

This family is one that I could only dream of having,” Brown said. “From the alumni to the 15 on our current roster and the players coming after.”

Brown plans to move to Illinois after grad­u­ation and become a real estate agent.

“As a coach, people want to define success as wins and losses and that’s part of the pro­fession, but I couldn’t be more proud of the man that Tavon Brown is and the man that he is con­tinuing to be,” Tharp said. “Same thing with Austen, Austen has grown quite a bit from where he was. They’re getting degrees from what we think is the best DII insti­tution in America and that’s the most important thing.”

While this is Austen’s last game with the Chargers, this is not the last Yarian to wear a Hillsdale uniform. Austen’s brother, 6 – 10 center CJ Yarian, will join the Chargers in the 2022 – 23 season.

“It’s pretty cool to see him kind of fol­lowing in my foot­steps, he went to the same high school as me,” Yarian said. “He knows how to win and I think he’s gonna be a huge con­tri­bution to Hillsdale.”

IUP freshman forward Tomiwa Sulaiman posted a double-double with 18 points and 10 rebounds, while guarding Cartier for much of the game.

“I thought Sulaiman played excep­tionally well,” Tharp said. “I think he does a lot of the dirty-work, not in a dirty way, but just all the little things that help them win games, he does a great job of that.”

Junior guard Jack Gohlke was the second leading scorer for the Chargers with 10 points, while junior guards Kyle Goessler and Cole Nau each had six points.

Tharp, the win­ningest coach in Hillsdale history, said everyone talks about the des­ti­nation and the journey, but he said he believes it’s more about the people you’re sur­rounded with.

“We’ve won a lot of games, had some great players, some All-Amer­icans, but I’m telling you the guys really, truly care about each other and love each other,” Tharp said. “In my 15 years, we’ve had one player that’s left the program. We are a program that’s based on culture and based on family, and that’s what we’ll always be.” 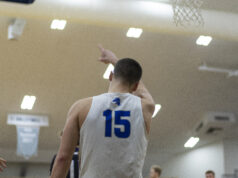 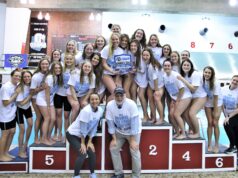 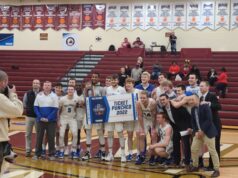