The Biden Administration’s decision to boycott the 2022 Winter Olympics demon­strates that America’s gov­erning elites are “the biggest bunch of fools and knaves ever brought together in history,” Asso­ciate Pro­fessor of Pol­itics John Grant said in a Feb. 3 lecture.

Rahe opened his talk with a his­torical analysis of the games. The first Olympics in 706 B.C. focused on foot races. A few cen­turies later, Gre­cians favored chariot racing as a means of attaining political honor and glory.

“These things have always had a political bent of the kind we’re seeing today,” Rahe said.

Refusing to send diplomats to this year’s games in Beijing means refusing to send first lady Jill Biden or Vice Pres­ident Kamala Harris, Grant said. As a result, America’s attempt to send a message to the Chinese con­cerning their treatment of the Uyghurs comes across as mere pos­turing, in part due to the com­plete eco­nomic inter­de­pen­dence between America and China.

The American elites in both parties are inti­mately con­nected to China: the Bidens have extensive business con­nec­tions, and Repub­lican Senate Majority Leader Mitch McConnell is married to the daughter of a Chinese shipping magnate, Grant said.

“All of our mean­ingful or most important problems with China are of our making,” Grant said.

The boycott comes further into question when exam­ining the blind eye that the United States has turned toward other coun­tries with major human rights vio­la­tions, such as the Demo­c­ratic Republic of the Congo, Grant said.

Regardless of the status of the Uyghurs and China’s human rights vio­la­tions, both Rahe and Grant agreed America’s interests should come first.

Eighty percent of America’s phar­ma­ceu­ticals are made in China, Grant said, and China has a monopoly on fer­tilizer, which is causing a 200% increase in its price.

Rahe affirmed Grant’s assessment of the current sit­u­ation, and sug­gested this pos­turing is a result of the quick turnover in American government.

“Many of the things that John Grant pointed to seem to me to derive from the fact that the current administration’s only concern is the next election,” Rahe said.

The four-year election cycle, which nat­u­rally leads to foreign policy changes with incoming admin­is­tra­tions, hinders America from playing the same long term game that other coun­tries, such as China play, Rahe said.

This is most notable in view of the recent events sur­rounding China’s aggression toward the island of Taiwan. Taiwan is the leading pro­ducer of semi­con­ductor microchips, making the tiny island in the South China sea an important player on the geo-political scale. Freshman Joseph Claeys enjoyed the points on Taiwan.

“I think the point about Taiwan and semi­con­ductors was really inter­esting,” Claeys said. “It’s another reason like we should defend the island, or at least try since it’s kind of almost out of reach.”

“I’d say it’s not our business because our American rights and inde­pen­dence are not at stake,” Grant said.

Without a direct chal­lenge to American rights and sov­er­eignty, inter­vention is hard to justify, making the boycott of the Olympics another example of political theater, Grant said. 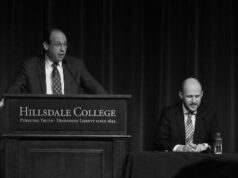 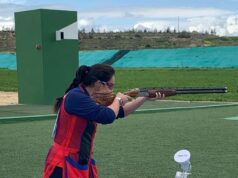 Brown and Connor Earn Silver at the Cyprus World Cup