The Hillsdale women’s bas­ketball team is tied with Ken­tucky Wes­leyan for second in the G‑MAC, winning 7 – 2 games played over the Christmas break.

“In the pre-season we were ranked 11 out of 12, so we’re not too worried about stuff like this,” head coach Charlie Averkamp said. “We’re just playing game by game and being the best team we can be everyday.”

The team began the break with a 87 – 65 loss to the Ken­tucky Wes­leyan Panthers.

“We knew that they had a history of playing really well, that just kind of got to us men­tally,” sophomore forward Arianna Sysum said. “We weren’t playing our game because we were focused on them.”

The Chargers fol­lowed their initial loss with a 6 game con­ference winning streak.

“I think it’s a tes­tament to how hard we’ve been working as a team, we’ve been doing a good job of holding each other accountable,” junior forward Sydney Mills said.

Mills led the Chargers in rebounds this break, with a season high of 17 against Lake Erie.

“Syd Mills averages a double-double, she’s one of the best rebounders in the con­ference,” Averkamp said.

The team also made offensive strides over the break, with Dani Salenbien, Carly Callahan, and Grace Touchette all hitting career-highs in points.

“Grace has taken her game to the next level,” Averkamp said. “She’s just an offensive and defensive threat. And Dani has grown into her game as a sophomore, she’s a jack of trades kind of kid.”

Other player’s impacts were not nec­es­sarily reflected in their stats.

“I have to shout out to Caitlin Nelson, she’s a con­stant ener­gizer bunny,” Mills said. “Her stats in games might not be the strongest, but that’s just because what she does doesn’t show up there. She always con­trols our pace really well, and is always guarding the strongest member of the other team.”

Despite the gained con­fi­dence from their winning streak, the Chargers suf­fered a 103 – 64 loss to the Walsh Cavaliers.

“Walsh and Ken­tucky Wes­leyan are older, more expe­ri­enced teams,” Mills said. “We’re a younger team and we’re still kind of finding our way. We’ve stepped back to look at those games and the main problem is that when we go into tough games, we try to be perfect. When we get tense like that things kinda go downhill.”

Despite these losses, the team is looking forward to facing Ken­tucky Wes­leyan and Walsh again.

“We just didn’t play Hillsdale bas­ketball,” Averkamp said. “We tried to be perfect, whereas we usually like to act perfect through our imper­fec­tions. I’m excited to get to play them again with a more loose attitude.”

The Chargers fin­ished their pre-spring semester play with a 91 – 61 win against the Malone pioneers.

Touchette led the team with 25 points, fol­lowed by Mills and Sysum’s tie at 13.

“To have eight kids so far score in the double digits this season is really impressive,” Averkamp said.

The players are con­fident going into the semester that school won’t impact their improving gameplay.

“I do think it was nice to have the time off so we could get into a groove and focus on bas­ketball,” Sysum said. “But now that we’re in that groove, I don’t think schools will affect us.”

Like his players, Coach Averkamp has high expec­ta­tions for the rest of their season.

“We did a really good job this fall semester in the classroom,” Averkamp said. “I’m not worried. We have a great group of kids who I know will succeed in both areas.” 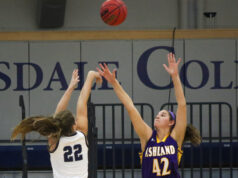 Women’s basketball drops to fourth in the G‑MAC 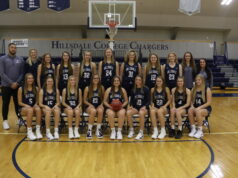 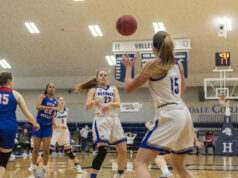