A new coffee shop in Quincy aims to end human traf­ficking by taking a min­istry-ori­ented approach to business.

Refuge Coffee is a family owned business that opened last March. Owner Dawn Bracy said the idea for it came, “straight from the Lord.”

“We started to get many con­fir­ma­tions that this is exactly what God wanted,” Bracy said. “He gave me the name and told me very clearly.”

Refuge Coffee aims at bringing awareness to human traf­ficking through the mission of their store and through com­munity outreach.

“We started a human traf­ficking awareness group for our com­munity,” Bracy said. “We trained the hotel staff around the Cold­water area to know what to look for in human trafficking.”

They also con­tribute to the fight monetarily.

“Every cup that we sell ends up helping the fight against human traf­ficking,” Bracy said.

Refuge House buys its coffee from Bella Goose, a roaster in Wis­consin that raises money to fight human traf­ficking and hires sur­vivors of traf­ficking at their stores, according to Bracy.

Faith is a central element of their business, Bracy said. The store creates oppor­tu­nities to open con­ver­sa­tions about faith with customers.

While praying with cus­tomers is central to Refuge Coffee, Bracy is careful in how she goes about it.

“I don’t feel like it’s in your face, but it is available and people know,” Bracy said.

Bracy said support from the com­munity has brought many opportunities.

“We have had a lot of support from the com­munity and it’s branching out. We do worship nights once a month,” Bracy said.

The business uti­lizes the whole family’s talents. Bracy said the whole family learned how to bake when they first opened. Rachelle Bracy, Dawn Bracy’s daughter, works as a barista and dec­o­rates the coffee sleeves with encour­aging phrases and drawings.

“When I have free time I try to put as much time into them as I can,” Rachelle Bracy said.

Aside from designing the coffee sleeves, Rachelle Bracy said she enjoys watching the younger crowd gather.

“My favorite thing is having the kids come in after school,” Rachelle Bracy said. “There are two little boys that will sit up there and drink their hot chocolate and talk to us like little adults. It’s really cool to see how they enjoy it here.”

Refuge Coffee not only attracts younger cus­tomers after a long day at school, but local Mariah Johnson often visits to work on coursework for her master’s degree.

“Having another coffee shop in the area that is family-based and family-owned is really good, too,” Johnson said. “I am working on my master’s, so having some­where to go to do homework that’s not my house has been good.”

Johnson said her favorite thing about Refuge Coffee is the wel­coming environment.

“It’s almost like an out­reach in my mind and having an outlet to feel com­fortable in my faith,” Johnson said.20

Starbucks should not come to Hillsdale

Starbucks should come to Hillsdale 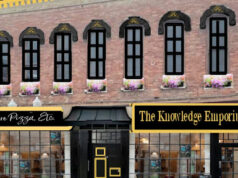 Family to open new businesses downtown, seeks to help those with disabilities