Imagine biting into the layers of the deli­cious Japanese dish, you can taste the soft rice, the fresh cucumbers, the tangy seaweed, the creamy avocado, and the salty salmon. Your flavor journey was just spon­sored by sushi.

While Johnny T’s Bistro has a Wednesday night sushi bar and Grab-and-Go once offered sushi, it is a tragedy that the Hillsdale com­munity does not have a location ded­i­cated entirely to their sushi aspi­ra­tions. But an even greater tragedy is the  people who are dis­gusted by the mere mention of the word sushi.

What could be the solution to these mis­for­tunes? People need to go out and try this delec­table delight. It will give sushi lovers an excuse to eat the food that brings them joy and it will be an adventure for those who have never tried it. The best way to find out if you will enjoy sushi is to try it with friends at a sushi restaurant.

There are two estab­lish­ments in Jackson that are perfect options for the intro­duction to the great dish: Ichiban Japanese Steak­house and AKA Sushi.

Some people think sushi restau­rants have to be high-end and exotic. But sushi is not a new dish in the United States. It actually has a col­orful history.

The ear­liest existing written ref­erence to sushi in Japan appeared in 718 A.D. and in the United States, sushi was being served by the early 1900s. Pop­u­larity of Japanese food peaked in 1905 when it was being served at Japanese-themed social gath­erings across the U.S. The ear­liest pub­lished mention of sushi eaten by an American, in America, was an article pub­lished in 1904 by the Los Angeles Herald about a lun­cheon served in Santa Monica by a socialite.

World War II saw Japanese-American restau­rants on the West Coast closing and selling off their busi­nesses due to internment orders on their owners. One restaurant that reopened after the war to serve sushi was Matsuno Sushi. This restaurant had been in business since at least  1938, and by 1949, it was back serving sushi for lunch.

The Kawafuku restaurant in Los Angeles has been credited with being the “first true sushi bar” in the United States, that is to say, the first to serve sushi from a trained sushi chef in the country.

So, sushi is not as foreign as people think. Though raw fish may sound unap­pe­tizing, when it is in a thick layer of sticky rice and fresh veg­etables, one forgets that there is an uncooked piece of salmon in the middle.

For those still on the fence, sushi also offers a handful of health ben­efits. Raw fish is rich in Omega3 fish oil, which reduces high cho­les­terol levels, the risk of heart disease, and inflam­mation. Omega3 fatty acids nourish brain cells and help to improve con­cen­tration and overall brain function. So if you’re nervous about con­suming raw fish, know that it will help you more than it could hurt you.

There are also many more options than the standard salmon and tuna. For the less daring, tempura shrimp is a tasty choice. The only dif­ference is fried shrimp takes the place of the raw tuna. Another choice is fresh­water eel. It is most com­monly grilled with a sweet, teriyaki-like brown sauce known as unagi. The sauce masks any eel-like flavor that might intim­idate a new consumer.

The various com­po­nents in this Japanese staple give the dish many more flavors than the assumed fishy taste. Chefs mix the rice with sea­soned vinegar to make it sticky and have a tangy taste. If the restaurant uses good seafood, the fish will taste so smooth, rich, and buttery that it will melt in your mouth.

Fruit is another great topping. Mango and peach give sushi a subtle sweet and sour taste which bal­ances the fishy flavor. The final touch is dipping sushi in sweet soy sauce to give a sweet yet salty finish.

There are many sushi com­bi­na­tions that con­nois­seurs of the scrump­tious dish can almost guar­antee a type they enjoy. A sushi restaurant is a novel place to expe­rience new flavors and taste some culinary history.

And if you have a friend who refuses to like sushi, then who cares? More for you. 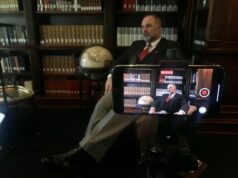