Hillsdale in D.C. ‘s radio studio recently expanded to allow stu­dents on WHIP and D.C. faculty to host new shows, enabling Hills­dalians in D.C. to advance Hillsdale’s mission beyond its 400 acres in Michigan.

“Hillsdale in D.C. serves to advance the mission of Hillsdale College through various mediums,” Matthew Spalding, vice pres­ident of Wash­ington oper­a­tions, said. “Our audience appre­ciates radio and pod­casts, and the Hillsdale in D.C. radio station allows us the capa­bility of offering that to our stu­dents, faculty, and allies.”

Spalding said the radio studio will con­tinue to operate as an outlet for stu­dents, faculty, and allies to spread the ideas of Hillsdale College.

The Boyle Studio was ded­i­cated at the Kirby Center in November 2015. The studio is a remote broadcast studio for vis­iting radio hosts and per­son­al­ities, including nationally rec­og­nized hosts, pod­casters, and news­makers, Spalding said. The studio includes amenities and accom­mo­da­tions for radio hosts and guests. It is fur­nished through the gift of the Vince Benedetto Bold Gold Media Group and the Bold Gold Broadcast & Media Foundation.

“The station pro­vides the oppor­tunity for our own faculty to conduct inter­views or record material, as well as extending the studio’s use to orga­ni­za­tions whose mis­sions are friendly to our own,” Schuster said. “It also just gives us a space for stu­dents to explore the radio world and get hands-on expe­rience using what Hillsdale has taught them during their WHIP semester or time in the graduate program.”

Schuster’s job includes coor­di­nating the use of the studio for outside groups, pro­ducing shows, and man­aging student shows for WHIP and graduate students.

Before the COVID-19 pan­demic, The Fed­er­alist Radio Hour and other shows were reg­u­larly recorded at the D.C. station. Spalding decided to welcome back shows in the fall of 2021, so Schuster has spent the past six months devel­oping the station.

“I also look forward to more under­graduate stu­dents using the studio as this semester gets underway,” Schuster said.

“Hillsdale stu­dents who are involved here at WRFH are encouraged to con­tinue working on their show or feature while on WHIP,” Bertram said. “The Boyle Studio fea­tures the same equipment that is used here in Michigan, so the tran­sition should be seamless.”

The studio has hosted The Vince Coglianese Show, which Schuster said pro­vided an oppor­tunity to raise awareness of Hillsdale’s mission among D.C. lis­teners. Vince Coglianese hosted Spalding; Matthew Mehan, director of aca­demic pro­grams for Hillsdale in D.C.; and Mollie Hem­ingway, senior jour­nalism fellow at Hillsdale, on the show to discuss their areas of expertise.

Mehan said he has used the station to record pod­casts about the liberal arts, talk with Bertram on his show, Radio Free Hillsdale Hour, and record an audio version of his children’s book “Mr. Mehan’s Mildly Amusing Mythical Mammals.”

“I’ve invited guests in to record their pod­casts and have dis­cus­sions with me,” Mehan said. “I’ve gotten to meet a number of inter­esting people who are there recording as our guests.”

“We have access to so many people who are actively making waves in national pol­itics here in the capitol,” she said, “and the studio pro­vides us a space to speak with them and connect them with our stu­dents and scholars in a way that’s more con­ve­nient and acces­sible than the main campus’ radio station for some.”

In the future, Schuster will con­tinue to expand the station’s pro­gramming. She said she will speak with WHIP stu­dents and friends of the college to find addi­tional hosts. Schuster said anyone on the main campus inter­ested in inter­viewing pro­fessors or stu­dents at the D.C. campus can do so, as well.

“Both cam­puses are working for the same purpose of pur­suing truth and defending liberty, and it would be won­derful to have more con­nection between the two,” Schuster said.

Though not often in D.C., Bertram said he will con­tinue to advise the D.C. station.

“It’s of great value to the station to have these con­tri­bu­tions from our nation’s capital and to allow stu­dents to con­tinue to grow in their work while in D.C.,” Bertram said. 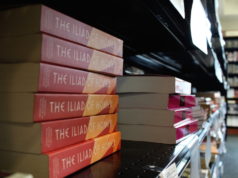