The Hillsdale Chargers vol­leyball team tied up its last loose ends of the regular season with sweeps over the Lake Erie Uni­versity Storm and Ursuline University’s Arrows to finish the season unde­feated in con­ference play and capture its fourth straight out­right G‑MAC regular season title.

In a weekend of three-set sweeps, the Chargers put their fall regular season behind them, fin­ishing with a 25 – 4 overall record and a perfect 16 – 0 in the G‑MAC. The Chargers also earned the top seed in the upcoming G‑MAC tournament.

This marks the four straight regular season that the Chargers have fin­ished with an unde­feated in-con­ference record. Their regular season G‑MAC win streak now stretches to 56 games, the longest such streak in program history by more than three-fold.

If they win the G‑MAC title, they will likely clinch a top-three seed in the NCAA Tour­nament set to begin in three weeks.

The Storm faced nearly every player on the Chargers’ roster, with 18 out of the 19 players seeing court time. Sophomore middle hitter Linnea Larson had a match-high of seven kills and pitched in three block assists. Freshman middle and outside hitter Marilyn Pop­plewell also had six kills and two block assists.

In the back row, freshman libero Alli Wiese ended the match with 12 digs alongside senior Maddie Clark’s six.

“Going into these final important games, the team is focusing on playing our toughest and crispiest game yet,” Senior Maggie DePorre said. “As a team, we under­stand that each game and practice is an oppor­tunity to get better.

In the match against the Arrows, the Chargers cel­e­brated the sweep by hon­oring their five-player senior class who have recorded a total of 126 vic­tories and 22 losses together. Seniors Maddie Clark, Allyssa Van Wienen, DePorre, Madie Schider, and Lindsey Mertz all faced their last official regular match together.

“Opening up in set one, I played a lineup of all seniors,” Head Coach Chris Gravel said. “We didn’t play that well at first, but then the emo­tions settled and we did great.”

The Chargers had a hitting per­centage of .342 and scored 21 of their 25 points off of kills. Clark tied her career best in kills in a three-set match with 14 total kills and seven digs. Schider played libero in this match and defended the Chargers with 13 digs along with DePorre’s four digs. Van Wienen ended the match with 12 kills and four total blocks, and Mertz had 39 assists and eight digs.

“Senior day exceeded my expec­ta­tions,” Clark said. “I was talking with some of my fellow seniors, and we con­cluded that we felt very loved and appre­ciated. It was a great day, and it was even more special that all of our fam­ilies were able to make it.”

The Chargers received a first-round bye in the G‑MAC Tour­nament. For the semi­final and final rounds this weekend, the Chargers will host their oppo­nents on Friday at 5 p.m. and Sat­urday at 7:30 p.m.

“It is always a special day because we get to cel­e­brate with each other,” DePorre said. “We are expected to give a lot of our­selves to the program, so it is nice to acknowledge what the seniors have given over their years.” 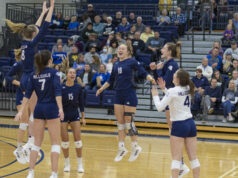 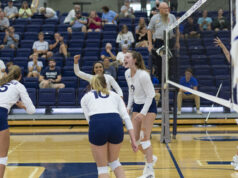 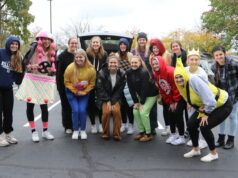