Dr. Hertel is an Assistant Pro­fessor of German at Hillsdale College.

Jeffrey Hertel is an assistant pro­fessor of German at Hillsdale College. This interview has been edited for length and clarity.

Is supper an acceptable way to refer to the last meal of the day?

As a Mid­west­erner, yes. However, dinner is not an acceptable way to refer to the second meal of the day.

What are your top three favorite restaurants?

A wing place in Bloom­ington Indiana called BuffaLouie’s, a Pak­istani Indian restaurant in Berlin that I can’t remember the name of but the food is to die for, and Chipotle.

What are your favorite places on campus?

The Arboretum and the bench that looks onto the parking lot next to Lane.

What is your favorite state you have been to?

It’s a tie between New Mexico and Maine. I’ve only been to both of these in the summer. In New Mexico, it’s super hot, but you go into the shade and it’s cool which is a phe­nomenon that as a child of the Midwest I never had growing up. And Maine is just stunning, espe­cially on the coast.

What are some of your favorite pastimes?

Hiking with my son. I mean, you can’t really call it hiking because he’s only four, but walking through nature with my kids, and amateur gardening.

What is your favorite place you’ve traveled to?

Zurich, def­i­nitely not because of the cost of a cup of coffee, but Switzerland is really sort of this meeting point of French, German, and Italian culture, and you just see it everywhere.

What is your favorite part about being a father?

Knowing what uncon­di­tional love means. I come home from work every day, and my kids run up to me to give me a big hug. We’ve got a son and a daughter and my son is a little version of me and my daughter is a little version of my wife. In this book, “Ele­ments of the Phi­losophy of Right” by Georg Wilhelm Friedrich Hegel, he says that children are the physical man­i­fes­tation of the rela­tionship of their parents. So in that way, it’s like you see the product of the rela­tionship that you have with another person and it’s just beautiful.

Do you prefer breakfast, lunch, or dinner?

Breakfast when you have time to enjoy it and dinner when you don’t.

What is your favorite class you have taught?

I’d have to say 19th century German lit­er­ature. 19th century lit is my spe­cialty in the German canon, but what was really incredible when I taught it here, was that the stu­dents had an intu­itive under­standing of what the authors were writing about in a way that I didn’t see else­where. When these authors were writing their works, religion played a role in it in a way that it doesn’t in the more recent ways that people discuss lit­er­ature. Lit­er­ature reflects and speaks to the society that it was written about, and the 19th century was a century of such huge ideas about what a good person can be under the stric­tures of modern society. So reading these works with my stu­dents was just beautiful.

Why do you think it is important that people learn another language?

I think, espe­cially for people that are already a bit older and know them­selves already, learning a new lan­guage is an oppor­tunity for them to relearn them­selves and to re-assess what’s important to them. In the lower level classes, most of what we talk about is what we like and dislike and things like that and it can seem really petty and unim­portant, but what it forces you to do is define yourself again, and that gives you an oppor­tunity to build another little version of yourself in your head.

What is an aspect of Germany that you think is superior to the U.S. and vice versa?

Do you think that the Germans have the drinking age right?

I think the pro­hi­bition of it makes it more dan­gerous for a lot of reasons, because it’s being turned into this taboo thing, and what are kids gonna do? They’re gonna do what their parents tell them not to do. That’s just what kids do. And so by accepting it as part of the culture, it becomes less of a problem. That’s not to say that there aren’t drunks in Europe, but I think German culture makes it less likely for people to do stupid things with it.

What is some­thing that you wish was a law that is not a law?

I wish robo calls were not allowed to exist. I mean it’s hor­rible, right? The expe­rience of col­leagues on the phone has been so cheapened when you get this robot voice trying to pretend to be a person.

When should people start lis­tening to Christmas music?

I think that in certain con­texts it’s okay to do it all year round, but I don’t think it should appear on the radio until after Thanksgiving.

Do you prefer Thanks­giving or Christmas?

In some ways, they’re really coter­minous for me. They essen­tially boil down to the same thing, which is getting together with your family and enjoying each other’s company. For one you get presents and for the other you get to eat too much turkey.

Would you rather go to the movies or to an orchestra?

If I was in Europe, I would love to go to the opera, but the orchestra is great anywhere.

Do you prefer mornings or evenings?

I used to be a night owl and now I am a morning person. I feel fresher in the mornings, and I have a clearer head in the morning. In the evening, I just want to sleep. I’m an old person now, and if I’m not in bed by nine I’m cranky.

What is your best rela­tionship advice?

If there’s some­thing you’re not happy with, for the person you’re with, don’t expect them to change that, because you have to take every­thing. People don’t come in bits and pieces. They are not Legos or some­thing like that where you can switch pieces around to turn them into the ideal person that you want. You have to approach things holistically. 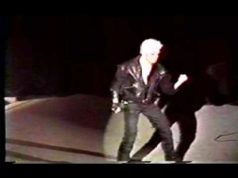 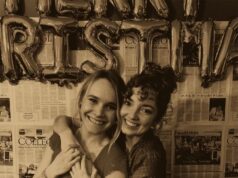