A doc­u­mentary on the impor­tance of finding true love in the modern world will play for all of campus in Plaster Audi­torium Tuesday, Nov. 16, at 8 p.m. with a dis­cussion panel to follow.

The Department of Phi­losophy and Religion will be screening “The Dating Project,” a doc­u­mentary that follows stu­dents and young adults in cities across the U.S. to explain how hook-up culture doesn’t meet the human desire for emo­tional con­nection. The doc­u­mentary offers straight­forward pointers for dating, such as taking more risks.

“The doc­u­mentary is thought-pro­voking, chal­lenging, and useful,” Asso­ciate Pro­fessor of The­ology Jordan Wales said. “How many of you recently went on a date that you knew was a date and wasn’t a long ambiguous interaction?”

The panel after­wards will include Wales, his wife Kathryn Wales, Pro­fessor of Edu­cation David Diener, and his wife Brooke Diener.

“The pan­elists are two intel­ligent, attractive, and enter­taining couples,” Pro­fessor of Phi­losophy and Religion Nathan Schlueter said. “I put this event together in con­junction with my Phi­losophy of Love, Sex, and Mar­riage class, but it is open to the entire campus com­munity and should be interesting.”

Wales said he wished the doc­u­mentary had existed when he was an under­graduate — a story he will cover in the panel discussion.

“The Hillsdale expe­rience offers a uniquely high-minded intel­lectual culture. It is not unique, however, in the phe­nomenon of young men and women anx­iously never asking each other out because they’re not sure what that would be like, how to do it, or what it would mean,” Wales said. “Or they fear seeming to try too hard, or — like most human beings — they fear rejection.” 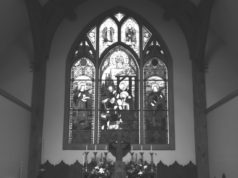 Anglican bishop opens up about leaving the Episcopal Church

‘Faith and Life’ series concludes with lecture on truth claims