Local sign lan­guage inter­preter Susan Shirk once swore she would never work at schools or reli­gious gath­erings. Now, after doing both for decades, she said she couldn’t be happier.

“I was working a full time job at a res­i­dential facility for a center for severely and pro­foundly hand­i­capped people,” Shirk said. “At that time, someone in admin­is­tration decided that it might be ben­e­ficial for some of the staff to learn sign lan­guage. There was one deaf res­ident but many others who had dif­fi­culty speaking well.”

Shirk’s interest piqued, and she sought out an edu­cation in sign lan­guage within her college.

“When I was a student at Bowling Green Uni­versity, I did some digging and found out that they actually had a pro­fessor who taught it,” Shirk said. “American Sign Lan­guage wasn’t con­sidered a lan­guage then. So at that time, it was being taught there as a ‘Psy­chology of the Deaf’ class. It was a four-credit psy­chology class with a one hour lab with a deaf woman who taught us some sign language.”

That was Shirk’s first formal class studying sign. She encourages others to look into the lan­guage, espe­cially since classes have become more commonplace.

Shirk put this phi­losophy to the test when she became a sign lan­guage teacher.

“I was at Madison schools,” Shirk said. “I taught high school stu­dents so they could get their world lan­guage credit.”

Shirk’s plans when she left college starkly con­trasted with her decision to start teaching.

Shirk’s plans did change after teaching, but she never left the school system as a whole.

“I now work for the schools as a K‑12 inter­preter,” Shirk said.

Cur­rently, Shirk is working with a Cold­water high school student.

“I go from class to class with her,” Shirk said. “She has algebra first thing in the morning, and that is where I am. Second hour is english.”

In 2009, Shirk branched from secular inter­preting to working through the Right of Christian Ini­ti­ation of Adults program when a Catholic priest was in need of help.

“Father Martin recently became a priest, but he was an RCIA student when he was in high­school,” Shirk said. “He is hearing, but both his parents are deaf. They wanted to invite his parents to come to church, so they asked in the bul­letin if anyone in the parish knew sign language.

With Shirk’s help, both of Father Martin’s parents went through RCIA as well.

“Inter­preting has really helped me to increase in my under­standing of our faith,” Shirk said, “simply because you can’t interpret some­thing you don’t understand.”

Shirk’s efforts at St. Anthony’s are appre­ciated by members of the com­munity for various reasons.

“I appre­ciate the deaf accom­mo­da­tions at St. Anthony, not only because it’s a regular occur­rence, but it allows for mass to be just as beau­tiful for the deaf since it is trans­lated,” hearing-impaired sophomore Catherine Spalding said. “This also allows for non-deaf or hard-of-hearing to be able to pick up on some signs which is also such a cool thing to see.”

Other parish employees appre­ciate Shirk’s ded­i­cation as well, whether they can make sense of it or not. 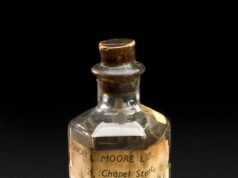 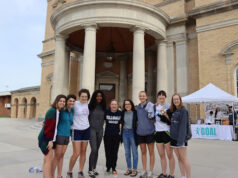 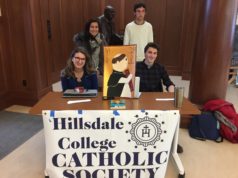