Two miles into the 5k, the team was far from first place. But with just 400 meters left, some­thing changed, and mul­tiple runners pushed their way to the front of the pack.

For the first time in Hillsdale Academy MHSAA history, the boys cross country team placed first out of more than 150 teams at the Division 4 state finals, which took place at Michigan Inter­na­tional Speedway on Nov. 6.

Team captain and senior Emil Schlueter was all-state, placing 8th overall, and had a time of 16.49.8. He said the team as a whole was not expecting to win the race, so when team results appeared on a screen a few minutes after the race, they were surprised.

“The online scores started to pop up, and we all thought, ‘We may have actually won this,’” Schlueter said.

Schlueter cap­tained a young team this season, including eighth graders, Cole Bates and Grayson Rorick, that ran as varsity team members. Despite how young and new the team was, Schlueter said seeing the runners improve throughout the season was inspiring.

“They’re such a young team, it was so impressive to see how they raced all season,” Schlueter said.

Though cross country may seem like an indi­vidual sport from the outside, Schlueter said the whole team needed each other to place as well as they did.

“It’s true for most sports that a team effort is needed to achieve the result,” Schlueter said. “Cross country gets over­looked because it seems indi­vidual, but we needed everyone. Everyone on the team really pulled their weight on Sat­urday and it made the difference.”

Head coach Michael Nikkila said, at the beginning of the season, he knew the team was good, but soon realized that this season they could make it far if they worked hard.

After placing second behind Concord High School at regionals, the team was hopeful they could beat them at the state finals, Nikkila said. Once the boys found out they won, Nikkila described them all as having wide eyes and mouths open in disbelief.

Mike Roberts, Hillsdale Academy ath­letic director and assistant head­master, said he was excited for the entire school to expe­rience this championship.

“I’m really happy for the kids and their hard work,” Roberts said, “but I’m also happy for all these ath­letes that just helped con­tribute to the general culture of the school.”

Roberts also said he is proud of Nikkila for his lead­ership in coaching, but espe­cially proud of the hard work all the boys put in.

“This has been in the works. These guys have been running, cer­tainly since last summer,” Roberts said. “So it didn’t happen by accident. Those guys worked for it. And it’s great to see work like that pay off.”

“I don’t think I’ve ever seen a team captain quite like Emil,” Nikkila said.

Above all, Schlueter said he was proud of everyone he ran with and is excited to see how they do in the upcoming years.

“Being with the guys and running with them and enjoying their presence has been really fun, Schlueter said. “They’re really inspiring to me.” 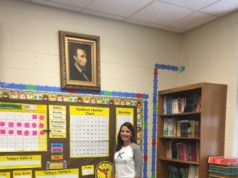