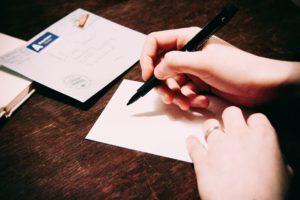 A slight rustle fills the room, and the touch of rifled paper lights excitement through the fingers. It’s not the boring bill on bleached paper, not the ad on cheaply colored sheets. Letters in royal blue ink, addressed to you.

Hand­written letters are a dying art form that everybody should help revive.

The sense of sin­cerity cap­tured by them still out­matches the digital mes­saging age, where elec­tronic mes­sages can travel mul­tiple times around the earth in mil­liseconds. Choosing to bring the letter to the post office, and making it travel on wheels and feet almost seems rebel­lious now. But as the letter journeys through the country, and some­times across the sea, it turns into a story itself, saying, “I have gone great lengths to reach you finally.”

Wrapped like a present, it reaches its final des­ti­nation, sparking curiosity. Instead of being one tap of the thumb away, already teasing the first line, the hand­written letter, closed, still exudes com­plete mystery. The envelope reveals the sender, and a first glimpse of the per­sonal hand­writing shows, but what is in there? A plea for money? Or a con­fession, tainted with goodbye? So used to instant infor­mation, now the expe­rience like five-star dining awaits, and the hand reaches for the knife in antic­i­pation, to cut open the envelope.

Now, the making of the sta­tionery also con­tributes to the thought­fulness and the longevity of the message. Thicker paper lasts longer, and a cream tone calls back to the days of royal courtship and, of course, drafting of con­sti­tu­tions. Being able to touch and feel the letter gives the words more weight and the sense that they are not purely products of the mind, but exist as a physical item in real life.

Your per­sonal hand­writing reveals more about you than the usual Hel­vetica font. Reading a letter can be a pure aes­thetic bliss with its cal­li­graphic curves, but can also be a way of making recip­ients really think about your words by letting them decipher your hiero­glyphs. What really adds color to the expe­rience is the fact that it becomes a sig­nature as unique as a fin­ger­print, and a mirror of your char­acter and per­son­ality. Some emo­tions felt during com­posing might even stay alive through the hand­writing: hap­piness is expressed in gen­erous swings, and the harshness of telling a bitter truth shows in sharp cuts.

There is an element of finality in hand­written letters. There is no delete button. So, the mind and the heart will care­fully craft every sen­tence, every expression, and then maybe find their early form on scratch papers. By the time the pen touches the actual sta­tionery, the refining fire of time and thought forged the words to their purest form pos­sible. The hand­written letter conveys most clearly and beau­ti­fully the message inside one’s heart in a way that no chat bubble can express.

Hope­fully, the letter will find a special fate in the recipient’s home, in a little wooden treasure box to read again months later with the ripeness of nos­talgia, or even burning into ashes at the flames of a match – it will leave a more mem­o­rable impression than a DM in the depths of dark under­ground cloud servers.

Crafting a hand­written letter is a skill that should be in practice more reg­u­larly again, espe­cially for people who have trouble expressing them­selves in a more vul­nerable way. Get a batch of sta­tionery and start with one short page: whether you encourage a friend who is having a hard time, or to express grat­itude for somebody who helped you while preparing for midterms. It is not only reserved for the hopeless romantics – even though love letters are espe­cially well-received by the crazed “Pride and Prej­udice” ladies on campus. 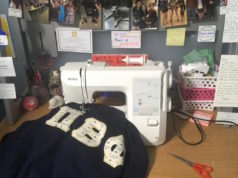 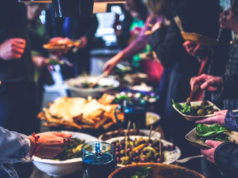 Write Letters for the Day of Thanks 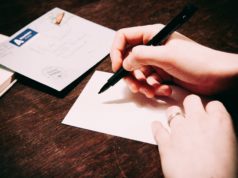 Write a letter to home