Time is cur­rency. And some people like to check their bank accounts more than others.

Scum-of-the-earth lower class like you and I may have a few papers here and there, but our schedules aren’t packed enough to list off a second-by-second play of our days. And it shows.

Hillsdale College Pres­ident Larry Arnn spends almost every waking hour of his days working to further the school’s mission. Yet he still finds time to come down to the dining hall and harass stu­dents about the good. Imagine if he rattled off a to-do list instead of quoting Aristotle.

The true hallmark of greatness is other people telling you how busy you are. Stop seeking approval by busy-bragging and instead, find joy in what you do.

If you can’t find  joy in a four-hour physics lab, that’s OK. But we all have the same 24 hours in a day — and acting like your time is rarer than someone else’s won’t gain you any respect.

If you have work to do, go get it done. And if you have time to spare, don’t spend it counting the hours you’ve already lost.

I’m too busy to listen to you com­plain, anyway.

Make the most of your time at Hillsdale

There are more problems with registration than just WebAdvisor 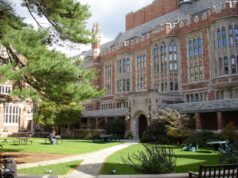 Judge Silberman is a relief in a woke world