The Hillsdale College vol­leyball team is now ranked 18th in the nation after a suc­cessful weekend of matches and a close loss. The Chargers also cel­e­brated a couple of mile­stones amidst their weekend sweep of the Ashland Uni­versity Eagles and the Tiffin Uni­versity Dragons.

Their Tuesday match against the Ferris State Uni­versity Bulldogs proved to be more dif­ficult, the Chargers losing by only a com­bined nine points across all three sets.

The Chargers won in three sets against the Eagles after a first set where they were down six points. With the help of junior outside hitter Karoline Shelton’s eight kills, the Chargers secured victory in the first set with a 25 – 22 ending score.

The Chargers won the fol­lowing two sets with a front row con­sisting of seniors Maggie DePorre and Maddie Clark each who fin­ished the set with ten kills. Senior middle hitter Alyssa Van Wienen and freshman Maizie Brown had eight and four kills respectively.

“You could tell we all wanted each and every ball.” Audrey Riley said. “I think every team and every player’s heart was in it this weekend, but our team chem­istry just seemed a little more put together.”

“We had a good week of practice, working extra hard to prepare for the weekend.” Head Coach Gravel said. “It was a total team effort, we were able to make a lot of switches on the court and everyone handled it well.”

“It was special to be honored at home after a big con­ference win against Ashland.” Mertz said. “My achievement is a tes­tament to the excep­tional hitters and passers we have had for the past several seasons and without them, it would not have been pos­sible to achieve this milestone.”

The Chargers wrapped up their week against Ferris State Uni­versity, falling by a com­bined nine points in three sets. Ferris State won 25 – 21, 27 – 25, 25 – 23 with 14 ties and nine lead changes in the first set alone.

Mertz dished out 38 assists, along with 10 digs and three kills.

“It is easy to look ahead to con­ference and regional tour­na­ments, but it takes extra focus to stay driven to attack one game at a time,” Mertz said.

Another one bites the dust, volleyball grabs two wins in its first home matches 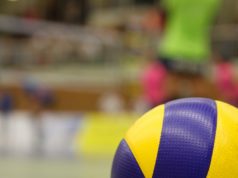