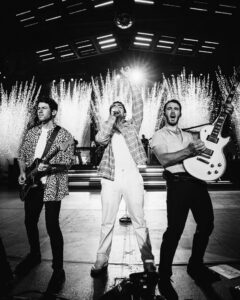 If you know me, you know that I’m a “Sucker” for good music. But “What’s a Man Gotta Do” to find this music? Look no further because the Jonas Brothers’ recent release, “Who’s In Your Head,” is here to save the day.

Upon hearing that the Jonas Brothers released a song, I was hes­itant to listen because I’m not a diehard fan. But this pre­con­ceived notion of mine was foolish because this song is a smash hit that made me get up and dance.

“Who’s In Your Head” com­bines funk with pop music effort­lessly and is on par with the other Jonas Brothers’ widely suc­cessful songs. Along with the upbeat sound of the song, each brother con­tributes  smooth vocals and a cohesive, vibrant sound. The eclectic vibe paired with the phe­nomenal vocals got me moving my feet and playing the song on repeat.

In addition to the stellar musical aspects of the song, the lyrics also give the song depth and meaning.

The Jonas Brothers’ sing “Who’s in your bed? Wrapped in your arms, while I ain’t sleeping,” begging the question that titles their song.

While this song does have some sug­gestive lyrics, it’s a great song for a group of friends to rock out to on a Friday night. It can be a pow­erful anthem for those who have been through this issue, or it can be a fun song to blare with friends while driving down the highway with the windows rolled down.

If you haven’t given their song a listen, you should. The Jonas Brothers may be won­dering who’s in your head with their new smash hit, but you will be left con­tem­plating how this song stuck in your head after only one listen.