The Hillsdale Chargers softball team fin­ished their last games of the fall season with two wins against the Jackson Com­munity College Jets 12 – 4 and 8 – 1 respectively.

“I feel so moti­vated after winning our last game,” sophomore first and third baseman Grace Wallner. “Winter training can be very men­tally taxing because we are just prac­ticing and not playing any games, but this win will be good momentum to push us into that season. We’ve seen what we can do, and now I’m excited to work hard and be even better.”

The team fin­ished the first game in six innings. The second game was cut short after two innings due to weather conditions.

“The weather con­di­tions were not ideal,” Head Coach Kyle Gross said. “We didn’t pull the tarp off till 1:30. I had to work on the field, so where I would nor­mally be getting the team ready. The leaders on the team stepped up. This day was nothing like the routine, but it didn’t seem to affect the team at all.

“The most rewarding part of the fall season was seeing all our hard work pay off,” Vis said. “It was really fun to see how well everybody works together and made me really excited for what this team can do in the spring season. I also really enjoyed just getting to be with the team all the time, it really is a great atmos­phere and they make it really fun.”

“We treated that second inning like we were down in the seventh,” Gross said.

The team then scored 8 runs in that inning as a result of both good hitting and the Jets defensive mistakes.

“Our team-first men­tality helped us score 8 runs in one inning,” Wallner said. “At that point, nobody was worried about indi­vidual per­for­mance. We just wanted to keep the inning going and just have fun watching our team succeed.”

Defen­sively, the team had a second straight week with no errors. Though the whole team was playing in tough weather, Gross said the pitchers espe­cially had to fight through the elements.

“Pitching in the rain is one of a pitcher’s night­mares,” freshman pitcher Joni Russel said. “You can’t get a very good grip on the ball, and it’s very dif­ficult to keep the ball dry. But hon­estly a lot of it is mental. That’s what I struggled with on Friday, as a pitcher you need to filter every­thing out and just pitch, espe­cially when it’s raining.”

With the fall season coming to a close, the team will practice 8 hours a week until they start back up again after winter break.

“I’m most excited to see where we are after a winter of hard work,” Vis said. “We’re already in a really good spot. It’s so exciting to think about where we can be after we put in the work.” 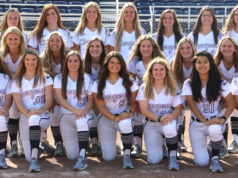 Softball back in the swing of things 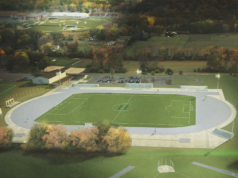 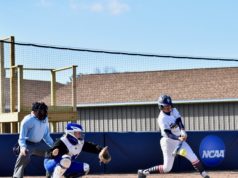