State Rep. Andrew Fink ‘06 dis­cussed duty to God, family, and country in a lecture and lunch for stu­dents, drawing from his per­sonal expe­ri­ences as a father, veteran, and politician. The Oct. 15 event attracted more than 20 attendees.

Fink said he was grateful for the college and wants to give back in any way he can.

“I just cycled off the alumni board, I was on that for eight years. Hillsdale has just been too important of a place for me to not put time back into it,” Fink said. “It’s cer­tainly true that the cost of tuition and whatever money you make in your career after­wards just doesn’t get at what the impact of the college is, at least in my life. There’ll never be a time where I don’t want to come back and give the college whatever it is I can offer.”

Fink said after grad­u­ating Hillsdale College he attended law school at the Uni­versity of Michigan, and then went to Officer Can­didate School to join the Marines. Upon retiring from active duty, Fink said he passed up oppor­tu­nities to work at larger law firms to work at his dad and uncle’s firm in Ann Arbor so that he could focus on spending time with family. He and his wife then decided to settle down and raise their children in Hillsdale because of its family-friendly community.

“None of those deci­sions helped me achieve more financial success, none helped me gain more fame or noto­riety,” Fink said. “Neither of those are strictly bad goals, but all of the career deci­sions I’ve made have been informed by a sense of duty.”

He con­trasted “eternal duties” with a world of mobility and fast-paced careers.

“Regardless of how your career comes together, your duties to God, your family, your country, and your com­munity are going to be there the whole time,” he said.

“The Food For Thought Lesson Series is a great way to give stu­dents the oppor­tunity to learn from and connect with suc­cessful leaders from a variety of fields,” Shea said. “The speakers who par­tic­ipate in the series, like Fink, are able to offer stu­dents an inside look at a par­ticular industry or field, and provide infor­mation that isn’t typ­i­cally taught in class­rooms or text­books.”

Fink advised the audience to not take being a student for granted.

“Don’t get too used to Hillsdale, it’s not like every­where else in the world,” Fink said. “It wouldn’t sur­prise me if some of you feel like coming back, too.” 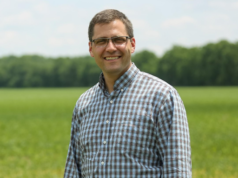