In a way, it was a coffee sub­scription that brought her to the convent.

Before she was Sister Lucia of the Word of God, Meghan Perks ’18 was a Hillsdale graduate pur­chasing a sub­scription to Mystic Monk Coffee, a Carmelite monastery’s small business.

Con­tem­plating the monks’ spir­i­tu­ality brought her back to a con­sid­er­ation of reli­gious life that first sparked in her heart during her time at Hillsdale.

Two years after grad­u­ating in 2018 and spending time teaching, and not long after buying Mystic Monk coffee, she joined an order of dis­calced Carmelite nuns in Louisiana.

“Living my life at Hillsdale, or at least trying to live it very fully, and seeing what spoke to me, what delighted me, slowly unfolded into where I am now,” Sister Lucia said.

Her time at Hillsdale was an adventure from start to finish.

Born and raised Catholic, Sister Lucia made her faith her own at Hillsdale before grad­u­ating in 2018. She dis­covered a com­munity of people that in high school she didn’t know could exist.

“I just found such beau­tiful friends who were really thinking deeply and were searchers,” she said. “I didn’t realize that that’s kind of what I was missing, a com­munity of people who are looking for the deeper things in life.”

By studying at Hillsdale, she said, she explored below the surface of normal teenage, American life. A member of Pi Beta Phi, the Disney Club, and Catholic Society, Sister Lucia also loved just getting coffee or meals with people.

Her reading covered Augustine, Aquinas, Plato, Aris­totle, and more great thinkers she hadn’t heard about or encoun­tered until then. Her pursuit of the English major helped her develop a capacity for deeper lis­tening and reading.

But there’s one writer Sister Lucia spent a lot of time with as an English major and keeps returning to: Gerard Manley Hopkins.

“All of my sisters here know who my favorite poet is,” Sister Lucia said. “I never talk about anybody else. I just spent a lot of time with dear, dear, dear, dear Gerard Manley Hopkins, and I cannot say that I under­stand all of his poetry, but I think I found him some­thing of a kindred spirit.”

The thoughtful intel­lectual life encouraged at Hillsdale inspires many stu­dents to pursue their spir­itual lives more deeply, including dis­cernment of reli­gious life. Junior Theresa DiFranco’s devel­opment of faith at Hillsdale has been similar to what Sister Lucia expe­ri­enced. She briefly dis­cerned life as a reli­gious sister as well.

“College in general was the best thing that hap­pened to my faith life, because it made it my own,” DiFranco said. “All of these core classes that I had to take opened my mind to dif­ferent areas of just viewing the world. I think that was really for­mative, at least for discerning.”

Asso­ciate pro­fessor of English Dwight Lindley, one of the pro­fessors who intro­duced Sister Lucia to Hopkins, became what Sister Lucia called her “life advisor.” After meeting with her aca­demic adviser to hash out prac­ti­cal­ities, she’d walk down the hall in Delp to ask Dr. Lindley ques­tions about life.

“When she entered the convent, I was really moved,” Lindley said. “It made a lot of sense, because she was such a deep person, and she’s sort of a total person. She was all in wherever she was, and had a lot of self-knowledge and self-pos­session. The kind of person who was capable of giving herself.”

Sister Lucia would visit Lindley’s office every semester to catch up for an hour and talk about books and the spir­itual life.

She sent her last email to him from the back of her parents’ car on the way to the convent.

“I don’t always talk with stu­dents sitting there in my office about prayer, but it was sort of at the front of her mind and her world, so it just sort of came up with her,” Lindley said. “I’m just really happy for her. Her joining Carmel is one of the hap­piest things that’s hap­pened to me since I’ve been teaching.”

When there wasn’t a reli­gious com­munity with an active apos­tolate teaching or serving that par­tic­u­larly struck her as she looked into dif­ferent orders during college, she con­cluded that it was time to close that chapter.

But then, working as a teacher in Louisiana, con­tem­plation of reli­gious life reawakened in her heart, and she bought the sub­scription to Mystic Monk Coffee.

The Carmelite monks who brew and sell the coffee are clois­tered. Her reflection on that lifestyle con­flicted with feeling drawn to share what she had learned at Hillsdale and what she believed. She couldn’t wrap her mind around the idea of locking herself away.

Words from St. Therese of Lisieux’s auto­bi­og­raphy, “A Story of A Soul,” that Sister Lucia had read in college came back to her in a new way. “In the heart of my mother, the Church, I will be love.”

“God’s grace was what actually goes in and changes people’s hearts. And I could shout from the top of the world all these things that are true about him, but no one would believe it if his grace wasn’t there to make it happen,” she said. “I could just see that through a life of prayer and sac­rifice and love, that that would somehow make my life into a kind of con­tinual prayer, the life of a channel of Christ into the world.”

The name “Lucia” comes from the name of her Con­fir­mation saint, St. Lucy. While she sees con­nec­tions to her title, “Word of God,” in her past as an English major and her love for praying with Scripture, she thinks she’ll spend her life uncov­ering the mystery of the title.

“I think it’s Edith Stein who says that the title is kind of like the secret of our mission in this world,” Sister Lucia said. “I’ll see how it all unfolds, one day in Heaven, but for now, it’s kind of a mystery, and I like it. It’s some­thing I can keep reading my expe­ri­ences through and trying to see what it is the Lord is going to reveal.”

She saw impa­tience in herself when she was trying to figure out quickly and exactly where she was going with her life during college. Trusting in God and living as fully as she can has decreased her worries, and she’s sure that life at Carmel will also evolve into some­thing she can’t foresee.

“I had no clearly dis­cernible desire for occu­pation in my life, so I think espe­cially in Hillsdale and beyond, I’ve really seen that it’s just been kind of a con­tinual, slow unfolding,” Sister Lucia said. “It’s a little bit more nerve wracking to live that way, but it’s also a little bit more exciting, because you never know what the next page will bring.” 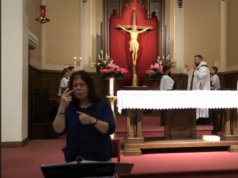 Lending a hand at Mass: Susan Shirk reflects on career as interpreter 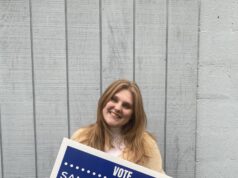