Zane Miller ’19 is picking up right where he left off at Hillsdale College in his new role as graphic design fellow for External Affairs.

The former art major who worked as a student designer for External Affairs will work remotely from Nashville, Tennessee.

When on campus, Miller designed the Winona yearbook and Tower Light covers and worked on free­lance projects. At least a few hours a week, he helped the External Affairs office with its design needs.

“Zane started working as a student designer in External Affairs shortly after I arrived in January of 2017,” Senior Art Director Shanna Cote said. “In his first week, I gave him a project to work on and he knocked it out of the park.”

Miller con­tinued to work as a student designer, and then as lead student designer, for two and a half years. He helped design the Hillsdale Mag­azine, the President’s Report, CCA invi­ta­tions, campus posters, ath­letics newsletters and schedules, and more.

Graphic design has been his passion for most of his life, Miller said. He did free­lance work throughout high school and college, and moved to Nashville after grad­u­ation to pursue more free­lance work.

“It was a little scary but I just had to kind of make a choice as to how I wanted my life to look,” Miller said.

Though Nashville is full of design oppor­tu­nities, Miller said the free­lance lifestyle was hard because he never knew what would come next.

“My biggest takeaway from free­lance work is that my Hillsdale edu­cation really helped,” Miller said. “I had to exercise so much time man­agement and so much self gov­er­nance because I was not respon­sible to anyone but myself and my clients.”

While working mul­tiple free­lance projects, Miller also worked a part-time internship for the Ten­nessee Board of Regents, a system of public uni­ver­sities in Ten­nessee. He worked 20 hours a week for nine months.

“That internship pro­vided even more graphic design expe­rience, and they kept me in higher edu­cation, which I liked,” Miller said. “I’ve always really enjoyed working in higher education.”

As the pop­u­larity of Hillsdale’s online courses has increased, the design needs for online courses and other pub­li­ca­tions and events in External Affairs has grown.

“Part-time student workers helped a bit, but the need to hire a full-time designer became a necessity,” Cote said. “My natural first thought was Zane. He is incredibly tal­ented and is already trained and familiar with all the work we do. Now that he’s hired, I’m excited to have our ‘team’ back together.”

Miller’s famil­iarity with the department and built-up port­folio of design expe­rience is a perfect com­bi­nation for coming back to Hillsdale, Cote said.

“His graphic design work always impressed the faculty, it was very pro­fes­sional and clean,” said Barbara Bushey, pro­fessor of art and Miller’s former aca­demic advisor. “I know he is very excited to be working for the college again.”

Miller said he was ready to be working with Hillsdale College and Cote again.

“It’s my job to make sure that every­thing runs smoothly and all the dead­lines are met,” Miller said. “Part of the reason I was brought on is because Shanna was slammed with so much work all the time. It was really good for me to be able to come in and help take some of the weight off.”

Though Miller will still be living in Nashville, Cote said they have each indi­vid­ually worked remotely before and that she expects his work to remain phe­nomenal even from seven-and-a-half hours away.

“I’m really honored that not only Shanna but the rest of the department was impressed enough by my work as a student that they would call me,” Miller said. “I really am grateful for the oppor­tunity to be able to come back and support a great school.” 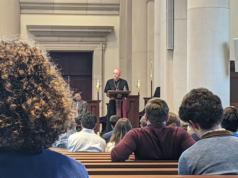 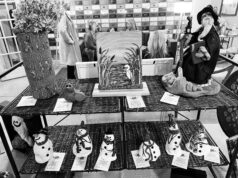