The swim team won both of the meets they com­peted in the past two weekends.

At the first, an Oct. 16 relay meet at Malone Uni­versity, the Chargers won every single event and fin­ished with a score of 190. Eight teams com­peted and the second and third place fin­ishers earned scores of 90 and 66 respectively.

Almost every team in the con­ference swam at the Oct. 16 relay meet which made the clean sweep par­tic­u­larly impressive, according to coach Kurt Kirner.

“We’re a very strong team in the con­ference,” Kirner said. “We have about six kids out with injury or illness and we were still able to put together 10 relays that were able to beat the other teams. It shows their depth and shows resilience.”

Some events at the relay meet were uncon­ven­tional and are not typ­i­cally raced in most meets, according to Junior Sydney Slepian. Some of these were the 3x100 yard relays in but­terfly, back­stroke, and breast­stroke, as well as a 3x500 yard freestyle relay.

“Having won all of them really shows how much depth we have, not just in certain events but really in all of our events and all of our strokes,” Junior Sydney Slepian said.

Sophomore Phoebe Johnston-Hoffman said she was excited about the clean sweep, but she also wants to avoid taking the win for granted.

“Our team depth is really going to have to come in Feb­ruary this year, so we’re really trying not to become com­placent,” Johnston-Hoffman said. “We really want to push our­selves in practice, in and out of the pool, just to make sure that we can do the best we can.”

The Chargers also won the Oct. 23 home meet. This was the first time the team com­peted at home in over a year, according to junior Leah Tunney, who was named GMAC athlete of the week after her per­for­mance at the Malone relay meet.

“It was good com­pe­tition,” Tunney said. “They pushed us and we all just swam really well.”

Notable per­for­mances include freshman Megan Clifford’s 200 yard but­terfly in which she broke the pool record with a time of 2:08.83.

“That was really exciting. One of my goals going into that meet was to try and get it, but I was hon­estly sur­prised when I did,” Clifford said. “It was so fun to see all the girls standing at the end of my lane cheering for me.”

The Chargers will compete at home this Sat­urday, Oct. 30 against Albion College and Wabash College. 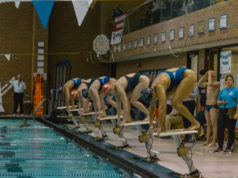 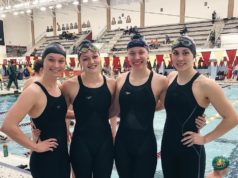