The Chargers at Joe Piane were led by junior Adam Wier, who con­tinued his stellar season with a five-mile time of 25:54, which earned him 33rd place.

“It was nice to race at a huge meet like Joe Piane and get to expe­rience some high level racing,” Wier said. “But now we need to get back to a good training cycle before the important post­season races come around and put our­selves in a good position to place well.”

The second Charger to cross the line was freshman Alex Mitchell, who fin­ished 60th overall with a time of 26:36. Fol­lowing Mitchell were fellow freshman Micah Van­derkooi, who came in 87th, and Preston Fagerlin, who came in 100th place overall.

At the LCC Invite, the Chargers fin­ished 5th as a team with 141 total points. In his senior debut, Mark Miller led the Chargers with an 8k time of 26:51, earning him 5th overall. Fol­lowing Miller were sophomore Isaac Waffle, who came in 18th place with a time of 27:22, and senior Jack Shelley, who fin­ished 29th with a 27:50 time.

First-year runner Richie Johnston ran a new per­sonal best time of 28:15, earning him 38th place overall. Johnston was fol­lowed by freshman Caleb Bigler, who fin­ished 61st with a time of 29:16.

“The past meets have helped us to get men­tally ready to compete against some fierce com­pe­tition at G‑MACs,” Johnston said. “The races have given us con­fi­dence going into each workout and future race. It is def­i­nitely crunch time now, but we know that we have the tools in our hands to do great things.”

“Notre Dame is great prepa­ration men­tally and phys­i­cally,” Head Coach R.P White said.  “Being in an envi­ronment where the best D1 teams in the country compete is valuable expe­rience. It helps prepare us phys­i­cally due to the fact you have to get out hard the first mile and hang on. We won’t be in a race that aggressive at G‑MAC’s.”

The Chargers will have a few weeks off to train before they compete in the G‑MAC Cham­pi­onships in Cedarville, OH, on Oct. 23. Fol­lowing that meet will be the NCAA Midwest Regional Cham­pi­onships in Evans­ville, IN, on Nov. 6. 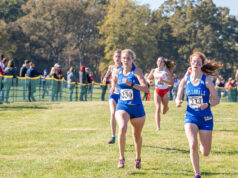 Women’s XC finishes 7th in the region, advances to Nationals 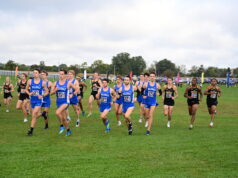 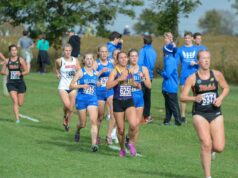