Berenson delivered his speech on “Truth, Science, and the Coro­n­avirus” to a full ​​Plaster  Audi­torium, shortly after teaching the first session of his one-week course as the Dow Jour­nalism Program’s Eugene C. Pulliam Dis­tin­guished Vis­iting Fellow in Journalism.

Berenson said sci­en­tists have down­played the side effects of COVID-19 vaccines.

“We’re a year and a half in, and people, mostly on the left, but some people on the right, have promised an easy answer to this,” Berenson said. “There are no easy answers to this. This is a virus that’s going to surge in and out, some­times the hos­pitals will need support, and oth­erwise, we go on with life.”

Berenson high­lighted another area of failure during the COVID-19 pan­demic: jour­nalism. He said jour­nalists should strive for a “reporting ecosystem that will give people fact-based reality-based jour­nalism that stands up to places like the New York Times.”

“If the reg­u­latory agencies and jour­nalists were func­tioning as promised, I would not be having to explain all this,” Berenson said. “I’m not a sci­entist, but I’m good at knowing when people are lying to me, and I don’t like it.”

Berenson said he advised his mother to receive the vaccine before the short length it pro­vides immunity became clear. However, he said he did not think the vaccine was nec­essary for him or his children.

“Now, I don’t think I need the vaccine,” he said. “As for my kids, they will get it when Florida freezes over. It’s not hap­pening. They don’t need it.”

After being kicked off Twitter in August for “repeated vio­la­tions of our COVID-19 mis­in­for­mation rules,” according to Twitter, Berenson started a Sub­stack newsletter. He has acquired more than 10,000 subscribers.

“I wanted to stay on Twitter because Twitter is where I’m going to talk to people who aren’t con­vinced,” Berenson said. “Maybe I’ll show them a study, maybe 80% of the time they’ll just tell me I’m an idiot and a grifter whatever, but once in a while somebody will check some data and see it’s correct. Now I can’t do that.”

“I thought it was inter­esting that he was a phar­ma­ceu­tical reporter, and able to interpret some of those medical ter­mi­nologies,” sophomore Emma Widmer said. “I think that’s super helpful because a lot of the political opinions that you get on COVID-19 I don’t nec­es­sarily trust because they’re not medical professionals.”

“I think that it pro­vided a good inside look at the chal­lenges of reporting on COVID-19-related topics like vac­cines,” freshman Madison Asher said. “I appre­ciated his argument that good jour­nalists should have the courage to let facts drive reporting, not political parties.”

Berenson’s book, “Pan­demia: How Coro­n­avirus Hys­teria Took Over Our Gov­ernment, Rights, and Lives,” is scheduled for release on Nov. 30. 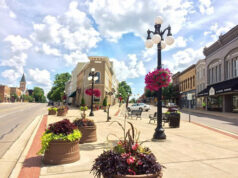