After a home loss against the Lake Erie Storm, the Hillsdale College Chargers pulled off an unlikely road win against the con­ference-leading Uni­versity of Findlay Oilers, pro­pelling them back into a tie for first place.

Aissen’s passing yardage was the most by a Hillsdale quar­terback since All-American Chance Stewart threw for 485 yards in 2018; it’s also good for seventh most in program history.

TeSlaa’s yardage was the most by a Hillsdale wide receiver since All-American Trey Brock had 302 yards, also in 2018. His game was the best out of any GMAC receiver this season, netting TeSlaa the GMAC Offensive Player of the Week Award, the first of his career, and his 193 yards are tied for eighth most in Hillsdale’s history.

“He’s an impact player,” Otterbein said. “There’s a bunch of good receivers in this league, and he’s in that discussion.”

The pre­vious week, the Chargers struggled against Lake Erie, falling 33 – 14. After the first quarter, Hillsdale led 14 – 6, but Lake Erie came roaring back, holding the Chargers scoreless for the remainder of the game and accu­mu­lating 499 yards of total offense.

Junior defensive back Josh Peroni said the team gained expe­rience in the loss to Lake Erie.

“I think as a team a lesson we could learn is don’t let up,” Peroni said. “Keep the same amount of intensity throughout the entire game that you brought to the first five to 10 minutes of the game. Keep that same intensity, that same energy, and that same attention to detail.”

The Chargers punted away their first pos­session of the game against Findlay, leading directly to a 60 yard drive and a touchdown for Findlay.

The next two scores of the game would belong to the Chargers, coming on touchdown passes to TeSlaa and senior wide receiver Alex Foos and making the score 14 – 7 with 14:09 left in the half. Findlay pro­ceeded to kick a 42-yard field goal just before the end of the half, making the score 14 – 10 Chargers.

Findlay received the second half kickoff with a 71-yard return, but they failed to find the endzone, set­tling for a field goal. Aissen scored the Chargers third touchdown of the game on a 1‑yard rush, making the score 21 – 13 with 1:53 left in the third quarter.

A swift, 58-yard drive from Findlay set them up for their third field goal of the night, and on the fol­lowing drive Aissen was inter­cepted by junior line­backer Jack Trom­betti, who returned the inter­ception 35 yards for a touchdown, making the score 22 – 21 Findlay.

The fol­lowing drive ended in a 37-yard touchdown pass to TeSlaa, and after a timely inter­ception by senior defensive back Alex Anschutz, Aissen threw 6 yards to TeSlaa for the Chargers final score of the night, ending Findlay’s hopes of a comeback victory.

TeSlaa said the team knew they had to perform well after their loss to Lake Erie.

“We knew we had to get a win, espe­cially with our loss to Lake Erie,” TeSlaa said. “We knew to get a shot at winning the GMAC we would have to go down to Findlay and get a win, and that’s what we did.”

The Chargers have three regular season games left, with the next one coming this Sat­urday Oct. 30 at Ashland Uni­versity. Ashland has a 3 – 4 record on the year, with two con­ference wins and two con­ference losses.

Otterbein said the team has to focus on fun­da­mentals against Ashland.

“We’ve got to do the ordinary things at an extra­or­dinary level,” Otterbein said. “You got to go out and you got to play a football game, and you’ve got to play it one snap at a time.” 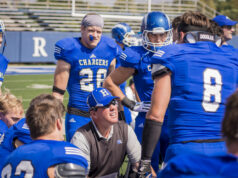 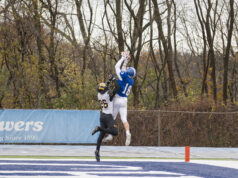 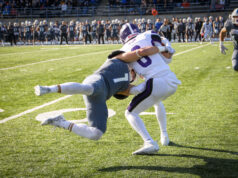