Dorm tra­di­tions forge the tem­perament of res­i­dents — dorm tra­di­tions like Niedfeldt’s long-standing tra­dition of Olds roses. Dorm rites shape char­acter: clan­destine court trials to resolve mis­conduct, eating meat bare-chested at dusk, tiki torch parties by the fireside, Smash Brothers tour­na­ments. Some within the clas­sical tra­dition have referred to this as forma mentis: “the form of the spirit,” the par­ticular way in which per­son­ality is expressed.

These spe­cific man­i­fes­ta­tions lead res­i­dents to speak, act, and live in dif­ferent ways: one can just tell if a freshman lives in Simpson, or Gal­loway, or any of the other dorms.

Res­ident turnover can cause fre­quent change in a dorm’s culture — popular habits and activ­ities will transform over the years. This year in Nied­feldt, for example, the basement RPGs have been thor­oughly over­shadowed by par­tic­i­pation in vol­leyball and the Grap­pling Club.

But some activ­ities stick around.

As the story has it, years ago, members of a rival male dorm took it upon them­selves to bring large bins of unwashed dishes to the Olds dorm and left them there for the women to wash. After word got around, Nied­feldters bought several bou­quets of roses and sym­pa­thet­i­cally hand-delivered them to the res­i­dents of Olds.

Since then, Olds roses has been one of the most stable dorm activ­ities for Niedfeldt’s fall semester. We buy roses, dress our rather unim­pressive dor­m­mates in suits, and unleash them upon the unsus­pecting res­i­dents of Olds, whom the RAs have kept in the dark about the event.

The element of sur­prise is one of the most important factors. Whereas the men have had hours and some­times days to prepare them­selves to hand out roses, the women are caught off guard. The men set aside the com­fortable sloven­liness typical of male dorm com­mu­nities, and the women have to overcome the inse­curity of not “appearing their best.” And while this event usually begins with both parties standing uncom­fortably on opposite extremes of the Olds lobby, it always ends after a long, enjoyable evening of conversation.

This tra­dition is one of the most important of Niedfeldt’s reper­toire. As a ritual, it sets a high standard for the men of the dorm. Olds roses sym­bol­i­cally “acts out” a behavior of honor, affection, and friendship. Women are to be respected and should be given the best that one has. Rela­tion­ships are not for self-interest, but for self-sac­rifice. We should give roses, not dishes. 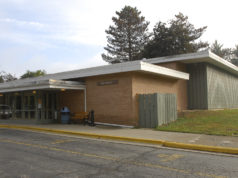