Res­i­dents and stu­dents piled into air­planes and heli­copters at the airport this weekend to get a unique bird’s‑eye view of Hillsdale.

Heli­copter and air­plane rides were available for $40 and $20 per person, and a Vietnam War Huey heli­copter gave rides for $99. The event also fea­tured a car show in the parking lot.

“A lot of mil­itary-type air­craft come in to give rides, we have heli­copter and air­plane rides, we have a vintage car cruise-in,” Moore said. “It’s a bunch of fun for everybody.”

The airport has hosted a fly-in event every year for the past two decades, but six years ago, it started hosting the event around the anniversary of the 9/11 ter­rorist attacks to honor the victims and heroes.

Pilots from Sky­walker Flying, a flying school based at the Lenawee County Airport in Adrian, gave the plane rides in a Cessna 172M, a 1970s-era small plane.

Junior Samuel Barke attended the event and said he enjoyed seeing the “pretty sweet line up of cars, planes and helicopters.”

“I was able to go up in a heli­copter and get an aerial view of Hillsdale,” he said. “If you have the oppor­tunity I would highly rec­ommend it.”

The Huey heli­copter was flown from the Yankee Air Museum in Belleville, an avi­ation museum southwest of Detroit that offers flights in his­toric air­craft. The fuel for rides on the Huey was donated by Hillsdale College.

Several museum vol­un­teers came to the Hillsdale event to help operate rides. One vol­unteer is Jim Wise, a Vietnam veteran who flew the same heli­copters in the war from 1971 – 1972, and who is now the chief pilot for the Huey at the museum.

“The Yankee Air Museum has been in exis­tence for over thirty years,” according to Wise, who has vol­un­teered at the museum for the last 15 years. “The idea was to pre­serve avi­ation history in the Michigan area.”

During the war, Wise was tasked with flying over enemy land to see where they hid.

“My job was to fly as low and slow as I dared to try and draw fire, so we know where the bad guys are,” he said. “Big sky, little bullet. You have to think that way every day.”

The other two Huey pilots at the event also served in Vietnam. “The three of us have been flying heli­copters for a few days,” Wise said.

The Huey heli­copter used Sunday was a U‑H1 heli­copter that came off the assembly line in 1966, Wise said.

The air­craft first spent 1,438 combat hours in air with the 240th Assault Heli­copter Company in 1967. It went on to be used by several more com­panies, flying thou­sands  more hours over Vietnam, even serving Navy Seals.

“We call it a living history expe­rience,” Wise said. “It gives people the oppor­tunity to fly on a his­torical aircraft.”

The Exchange Club of Hillsdale sold breakfast at the event, fundraising for its char­i­table activ­ities throughout the year. The group also hosted a raffle to win free tickets for a Huey ride.

The airport makes no profit from the event, Moore said, and pro­ceeds went to the Exchange Club and flight companies. 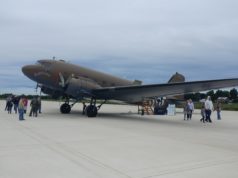 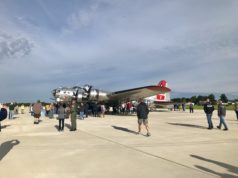