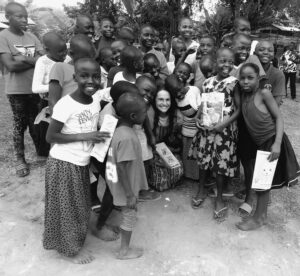 This past summer, freshman Isabella Socha and her father, Robert Socha, embarked on a life-changing  journey to Uganda, Africa.

Since high school, Socha dreamed of going on a mission trip to Africa, but it became a reality when she and her father developed a rela­tionship with Pastor Paul Gidudu, a min­ister who lives in Uganda.

After waiting a year during the pan­demic, Socha received news of the pos­si­bility of another trip cancellation.

“Uganda went on lockdown a month before the trip,” Socha said. “I had been preparing for this trip for so long and to have it can­celed did not make sense to me. Then, we heard tourists were allowed to go. I knew it was the grace of God.”

Upon their arrival, they received an unending stream of wel­comes from Ugandans.

“They’re gentle and gen­erous. They want to make sure their vis­itors are very com­fortable and well attended to,” Robert said.

The Sochas had a twofold purpose to their visit: bring hope and peace to the hearts of the people amid the lockdown, and form con­nec­tions so as to improve the physical con­di­tions of the community.

After landing, they traveled 16 hours by car to the country’s capital, Kampala.

At the hotel, the Ugandans never let the Sochas seat or serve them­selves.  The Sochas were astounded by their sac­rifice and hospitality.

Throughout the three weeks of the trip, Isabella and her dad hiked to dif­ferent vil­lages to deliver food and clothing. Every day, the pair would speak about the Christian faith for an hour on the radio, reaching more than 400,000 Ugandans, Robert said. Robert focused on devel­oping rela­tion­ships with local leaders and author­ities while Isabella spent her time inter­acting with the children in the community.

Isabella said the love and beau­tiful spir­i­tu­ality of the children she met in the village Mbale was par­tic­u­larly striking. Because of their poverty, the children realized a need for Jesus, she said.

“They just love the Lord so much here,” Isabella said. “They were crying out with the most sincere faith. For an hour and a half they would pray during lunch, ‘Lord, we sur­render. Please remember us in our trials. Please remember us when we are strug­gling. We want you. We love you.’”

At one point, Isabella wanted to pray with a certain girl. The two were facing one part of the classroom singing and praising. About halfway through the song, Isabella turned around and found that the other village children had filled the whole classroom and were singing in chorus with her.

“In Uganda, they worship God until they are hard and dry,” she said.

While Isabella toiled away at her work, Robert met with the Mbale Rotary Club to improve living con­di­tions and establish plans for a stronger edu­cation system.

“Our short term goal is to drill a water well and tower with solar power,” Robert said. “The system will have mul­tiple spigots that are gravity fed which will provide fresh, clean, fil­tered water. Our long term goal is to help the pastor expand his orphanage into a primary and sec­ondary school.”

He also spoke of the severe poverty present within the community.

“We were told of a grand­mother who would take off her robe to cover her four grand­children at night. That’s the kind of thing that tears at the heart strings that this is some­thing which actually happens,” he said. “This is a real person who is trying to con­tinue exis­tence for herself and her grand­children, and is in such a des­perate state that she would have to cover them with her own clothes at night so they wouldn’t be cold. That was one of the most touching moments.”

Despite the harsh con­di­tions, Robert said the children are filled with optimism and joy, along with a desire to live and become pro­ductive con­trib­utors to society.

“These kids in this orga­ni­zation are dreaming to be doctors and lawyers and mechanics. They are not thinking that they are con­demned to live in poverty,” Robert said. “What you’re born in doesn’t define you. With hard work and deter­mi­nation, with edu­cation, with people loving you and encour­aging you to improve, you can accom­plish anything.”

Isabella said she hopes to return to Uganda and con­tinue her mission of evan­ge­lization and edu­cation with the children in the Mbale village. In the meantime, she looks to study the­ology and receive a minor in early edu­cation to prepare her for this future task. Robert con­tinues to strengthen rela­tion­ships with his Ugandan coun­ter­parts so as to bring hope and peace to the hearts of the people in the small vil­lages of Uganda.

However much love the Sochas gave to the Ugandan people, the Sochas felt so much more in return, they said.

“We made an impact?” Isabella said. “They do not even under­stand the impact they have made on my heart!”