The local company, Ad Astra, is a three-year-old coffee roastery owned by U.S. Marine veteran Patrick Whalen, and his wife Kristi, a Hillsdale alumna. Patrick Whalen is the son and brother of Pro­fessors of English David Whalen and Ben Whalen respec­tively, and cur­rently serves as Hillsdale oper­a­tions assistant to the pres­ident at Hillsdale College. The Whalens moved the company from Kansas to Hillsdale in 2020 and have built a local fol­lowing through their sales at Hillsdale’s Farmer’s Market, online, and at their indoor markets at the roastery during the winter months.

As of August, all coffee served in Hillsdale’s dining hall will be pro­vided by Ad Astra.

“There’s already a flavor for that coffee at Hillsdale, so it was a natural fit,” Bon Appetit General Manager Benito Suero Jr. said.

As part of the con­tract with Bon Appetit, Ad Astra pro­vides all the machinery needed to prepare it in the dining hall’s kitchen — such as a grinder, two-pot brewing machine, and airpots for serving.

“It’s a really big process,” Ad Astra Manager Morgan Mor­rison ’21 said. “We put our machines in the kitchen and spent a lot of time there fig­uring out ratios.”

According to Suero, it’s standard practice in the food industry for the coffee provider to provide the brewing equipment. Because Ad Astra is a small company, Bon Appetit con­tracted them with just the dining hall and the former dining hall coffee provider Zingermans will still be served in A.J.’s Cafe, Jitters, and Bon Appetit Catering.

“The natural question is why not serve in A.J.’s? Well, right now the dining hall is a com­fortable level of coffee and equipment for Ad Astra to supply,” Suero said. “But down the road I would love to expand their foot­print on campus.”

Bon Appetit will pri­marily be serving “The Whitney,” which is a honey-processed bean named after Hillsdale College student and Civil War medal of honor recipient William Whitney. According to Mor­rison, Ad Astra sourced the beans from a farmer in southern Brazil specif­i­cally for the con­tract with Bon Appetit.

“It’s part of a broader ini­tiative for Bon Appetit to source locally, so it makes sense for them to partner with a local company that shares the vision of the college,” Mor­rison said. “The norm is to be unethical in the wholesale coffee industry, but we know the names of the farmers that produce our beans and pay them a just price.”

Junior Isabella Murphy said she appre­ciates that Bon Appetit is part­nering with stu­dents and locals.

“I think it’s really cool that we get local coffee in the dining hall and that they are investing in a business that’s local, young, and employs current and past stu­dents,” Murphy said. “Hope­fully by having Ad Astra in the dining hall, the company gets some recog­nition to grow even more.”

All the Ad Astra coffee will be served “bean to cup,” which means the Bon Appetit staff will grind beans only as they’re needed to prevent the grounds from oxi­dizing and giving the coffee an aftertaste.

Addi­tionally, the brewing system pulses the water on and off over the beans instead of steadily pouring the water over the beans. Suero explained that this process takes twice as long — 14 minutes instead of the usual seven — but allows for the dif­ferent char­ac­ter­istics of the bean to “make it to the pot” and result in a better cup of coffee.

“Food is life, and coffee is part of that,” Suero said. “A really good cup of coffee com­ple­ments a meal.” 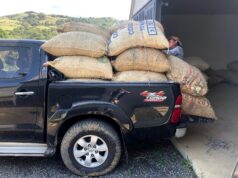 Columbian student to bring his homegrown coffee to Hillsdale