Three Spanish pro­fessors are retiring after each teaching at the college for more than 30 years. Kevin Tee­garden, Carmen Wyatt-Hayes, and Sandra Puvogel are fin­ishing their last semester of teaching, and will retire at the end of the school year.

A Fort Wayne, Indiana native Tee­garden didn’t get involved with Spanish until he was in high school. In ninth grade, Tee­garden fell in love with the His­panic culture and lan­guage, and spent a summer in Mexico.

“I thought my lifelong goal was to work in a book­store,” Tee­garden said. “But after I grad­uated, I couldn’t find a job in a bookstore.”

Instead, Tee­garden con­tinued his edu­cation at Indiana Uni­versity, and went on to get his master’s and Ph.D. in Spanish, and studied abroad in Madrid and Barcelona.

“All those expe­ri­ences in Spain taught me about the Spanish speaking world, and piqued my interest in it,” Tee­garden said. “I’m still fas­ci­nated by it today.”

In 1991, he found Hillsdale College. Tee­garden wanted to teach at a small insti­tution so he could focus on teaching, rather than writing or publishing.

Though he’s not a native speaker, manys have noticed that he picked up an accent.

“I’ve been told I have an accent,” Tee­garden said. “And the reason I think people might say that is because I was married to another Spanish pro­fessor here — who’s passed away — for 25 years. And we spoke Spanish all the time at home. She was from Puerto Rico, so Spanish was her first language.”

One of the high­lights of teaching a lan­guage is getting to see a stu­dent’s progress, Tee­garden said.

“When I teach the Don Quixote seminar, when I see they’re actually reading it and getting it and they’re under­standing some of the sub­tleties of the lan­guage or some of the lit­erary tech­niques — that’s sat­is­fying,” he said.

Wyatt-Hayes spent her whole life in between Costa Rica, her mother’s homeland, and Mis­souri, where her father was from. Her parents would get homesick for each place, and move back and forth. Wyatt-Hayes studied Spanish and French at Notre Dame College in Cal­i­fornia, and went on to get her doc­torate at Stanford Uni­versity. Between California’s expensive cost of living and fast-paced lifestyle, she went looking for some­thing more like home, and in 1989, she came toHillsdale.

For 31 years, she’s taught classes ranging from Spanish 101 to 400-level sem­inars she designed herself. Her favorite seminar was  one called “Entre Dios y el hombre,” which means “Between God and Man.”

“I love the liberal arts edu­cation, and I love that I can teach a class with a title, ‘Between God and Man,’ and that stu­dents are eager to take it,” she said.

Aside from looking forward to more leisure time, Wyatt-Hayes said she will miss inter­acting with students.

“I would have stu­dents write ques­tions for each class based on the lit­er­ature,” Wyatt-Hayes said. “And some­times their ques­tions were so good that they helped me under­stand an aspect of the work of lit­er­ature that I hadn’t before.”

Years before she began her 34-year teaching career at Hillsdale, and two years before she ever took a Spanish class, Puvogel was studying French in high school.

“It was sort of the luck of the draw. I thought, ‘Well, I think I’ll try Spanish.’ And that’s kind of what decided the tra­jectory of my pro­fes­sional life,” Puvogel said. “It wasn’t really a con­scious decision. But it turned out to be a won­derful decision.”

Once she had her Ph.D., Puvogel began searching for a full-time job at a small school in Michigan, where she could stay close to her family.  She joined Hillsdale’s Spanish department in 1987.

“It’s  quite a chal­lenge to jump right into a lan­guage in college,” Puvogel said. “It’s been won­derful to be part of that chal­lenge and to see how much stu­dents can learn.”

Having col­leagues who support each other in the classroom and in life, and a student com­munity to learn and interact with has been more than she could have ever hoped for, she said.

“It has been an honor and a priv­ilege to work with the stu­dents here at Hillsdale,” Puvogel said. “What I admire most about Hillsdale College stu­dents is that they are willing to work hard, and I see a joy in learning in them that I just find so admirable.”

As Wyatt-Hayes heads into retirement, she is first and foremost looking forward to not rushing in the morning. She is excited to paint, garden, keep up with family, travel a little bit, and even do part of the Camino de San­tiago, a pil­grimage leading to St. James the Great cathedral in Galicia, Spain.

“It’s such an ancient thing,” Wyatt-Hayes said. “That was some­thing of tremendous spir­itual impor­tance to people of the Middle Ages, and I think people still find it of spir­itual importance.”

Tee­garden is excited to have the freedom to travel, read, and write more in his free time.

“I’ve mostly been limited to trav­eling in the summer,” Tee­garden said. “But there’s sun­shine over 300 days of the year in Spain.”

Puvogel plans to travel and spend time with her family, espe­cially her 1‑year-old and 7‑month-old grand-nephews. After devoting so much time to the college, she also wants to take time to give to the city of Hillsdale’s community.

“It has been a joy to work with the stu­dents at Hillsdale,” Puvogel said. “I will never forget that.”

Senior Eliza Miller, a Spanish major and member of the Spanish hon­orary, said she’s sad for stu­dents who won’t be able to expe­rience Tee­garden, Wyatt-Hayes, or Puvogel’s classes.

“All the Spanish pro­fessors are really per­sonable, and they really care,” Miller said. “I can’t really imagine a Spanish department without those three. We will def­i­nitely miss them.” 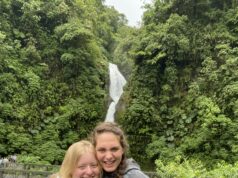 Nine students live in Costa Rican culture for a week