The year was 258 A.D. and St. Lawrence was con­demned to a slow, ago­nizing death by the prefect of Rome. He was roasted alive: tied above a grill and slowly spun over a fire. But his devotion to his faith made him hardly able to feel the flames, and he reportedly joked, “Turn me over, I’m done on this side!”

Thus, St. Lawrence joined the mul­titude of other Christian martyrs in the early church. Among them was Per­petua, who was devoured by wild beasts in an arena, and St. Stephen, who was stoned to death for his faith.

It is dif­ficult to learn about these early Chris­tians without imag­ining their dis­tur­bance if they could see the church today — closed, restricted, or empty in many states, while grocery stores, liquor stores, and restau­rants do their best to remain open.

While Catholics in Hillsdale are for­tunate to have rel­a­tively normal Masses and church offerings, the same can not be said of churches worldwide. California’s ban on indoor church was only lifted this past Feb­ruary, and ser­vices still remain severely limited. In the early weeks of the spread in Italy last spring, churches were open to tourists, but not to wor­shippers. Even in places where Mass has been allowed, many dio­ceses chose to shut down or limit access, and many parish­ioners chose not to attend because of COVID-19 anxiety.

As we head back to our home parishes during spring break, Catholic Hillsdale stu­dents should be pre­pared. When I was home during Christmas break, I was shocked at how empty the pews at my church were, with barely 45 people attending the Christmas Mass that is nor­mally packed. The priest excused the poor atten­dance by saying it was OK to refrain from Mass as a result of COVID-19 anxiety. But does that same anxiety prevent people from doing other essential activities?

Going to church and receiving the sacra­ments is the most essential duty of a con­firmed Catholic. Canon law states that Sunday must be observed in the uni­versal Church as the pri­mordial day of holy oblig­ation (Can. 1246 §1). Addi­tionally, members of the Church have the right to receive the word of God and the sacra­ments (Can. 213), which can’t be received via Zoom or a Facebook livestream. While excep­tions exist for those espe­cially at risk or unable to attend Mass (Can. 1248 §1), healthy Catholics have no reason to skip; nor do bishops have reason to deny access to the sacraments.

It is easy to get caught up in fear about COVID-19, but we are a year into the pan­demic, long past the initial “two weeks to slow the spread” cam­paign. Grocery stores are highly traf­ficked, restau­rants are as full as capacity rules allow, and there are waiting lists at salons and barbers — so why are church pews across the nation so empty? During the stress and grief that results from a pan­demic, the Church should be a place for believers to turn to for relief and hope. It should not be per­ceived as a threat. When you go home for spring break this year, don’t be afraid to encourage others to fill the pews of your church. It’s our right and duty as Catholics.

Maggie Hroncich is a sophomore studying pol­itics. She is an assistant editor for the Collegian. 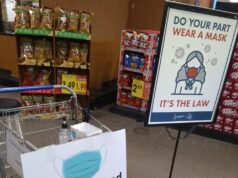