In a room of women furi­ously scrib­bling notes on her advice for healthy dating, Eliz­abeth Schlueter gave a per­fection description of the second annual Curate Summit:

A variety of speakers joined the female pop­u­lation of Hillsdale college on Sat­urday, Jan. 30 to share their pas­sions and give advice. Doctors, teachers, wives, mothers, and busi­ness­women spoke on topics ranging from physical and emo­tional health to men­torship, a woman’s role in the work­place, and friendships.

Curate gave stu­dents a chance to step away from school for a day and cel­e­brate their unique gifts. Flowers, t‑shirts, and music greeted women as they walked in. In the down­stairs lobby of the Searle Center, women got in touch with their cre­ative sides by con­structing vision boards, planting wild­flower seeds, posing at the photo booth, or simply taking an oppor­tunity to chat with friends over coffee and pas­tries. There were also sta­tions to write notes of encour­agement, or send thank you cards.

Five break out ses­sions over the course of the day gave women the freedom to choose the topics most inter­esting to them. Here are my five favorite quotes from the Curate experience:

Katherine Rick, an adjunct piano instructor at Hillsdale College, explained that bound­aries are inher­ently part of reality, and that good bound­aries are born out of love, not self­ishness. She con­trasted Gala­tians 6:2, which com­mands Chris­tians to “carry each other’s burdens” with the message found a few verses later that “each man should carry his own load.”

We have a respon­si­bility to help the people in our lives, but we can’t control every­thing — only God can do that. Some duties, like getting enough sleep or writing a paper can’t be done for us. Those are loads we need to carry for ourselves.

“Where your God-given gifts intersect with a need in your world, therein lies your purpose.”

In an extremely humorous talk, Hillsdale Academy drama teacher Kathryn Wales shared her expe­rience of seeking men­torship and even­tually becoming a mentor herself. She defined a mentor as an expe­ri­enced and trusted advisor who is farther ahead on a path you would like to go down.

Good mentors teach us to see the world and our gifts accu­rately. We can be blind to our own toxic pat­terns, and mentors provide tough love and direction.

“Friendship involves catching people on the bounce, after they’ve hit the ground.”

In a more somber session, alumna Alex Whitford, an account manager at DRTV, spoke about grief. Everyone will expe­rience loss, or witness  someone they love strug­gling with grief at some point, and Whitford spoke about what she learned from her own expe­rience of grieving in college after her father died.

“Pain in life is normal and natural,” she said.

Whitford went through common symptoms of grief, such as dif­fi­culties sleeping or eating, feelings of regret, lone­liness, and  guilt, and avoided her feelings when they became too much. She pro­vided an oppor­tunity for women to talk about grief they’ve dealt with, and gave tips to friends who want to help, such as lis­tening without advising, or doing little things without being asked.

“Real mar­riages are made and chosen. They are not won.”

Con­trary to movie-romances, finding a soul-mate isn’t like drawing the winning card out of a deck; it takes work. Home­maker Eliz­abeth Schlueter dis­cussed how to date for a healthy mar­riage. The primary purpose of dating is to clearly know a person, and that before a person can date, he or she needs to develop strong rela­tion­ships with God, family, and friends.

Strong wom­anhood means leaving space for men to take ini­tiative, and for a rela­tionship to grow nat­u­rally. Each woman, endowed with a “fem­inine genius,” must be aware that God entrusts the human person to her in a special way.

Tori Petersen, a non-profit founder and exec­utive, chal­lenged women to be vul­nerable. The walls we put up in relating to others only serve to limit our per­spec­tives and create bar­riers between people. Vul­ner­a­bility, while uncom­fortable, begins to heal bro­kenness and lead us closer to God.

As the stress of a new semester begins to unfold, Curate gave women across campus a chance to connect with each other and grow in wisdom. Each woman has dif­ferent gifts and struggles, but, like wild­flowers, the woman around me at Hillsdale are unique and beau­tiful. And Curate was just a reminder of that. 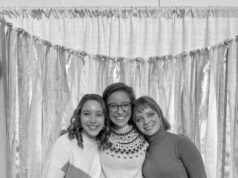 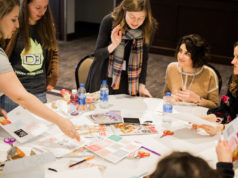