Dial-A-Ride is funded mostly through ticketed fares. As a result of lost revenue, the bus service had to restructure its labor while imple­menting new cleaning and dis­in­fecting pro­tocols, according to Director of Public Ser­vices Jack Hammel.

“It affected us quite a bit because we saw a big decrease in our service, at least ini­tially,” Hammel said. “A lot of that had to do with school closings. We provide a lot of rides for charter schools that don’t have bussing of their own.”

The City of Hillsdale bought Dial-A-Ride in Feb­ruary 1975 from a private owner, Kehn said. She knows the program’s history because of her own long bout with the service. She joined the team as a driver in 1980 to make a little extra money.

As the dis­patch super­visor, Kehn figures out how to run the buses most effi­ciently, saving the most miles and gas, while fielding calls and meeting everyone’s needs. The service drives any­where in the city limits. On occasion, it makes longer trips for an increased fare.

“We didn’t want our public trans­portation to become a super­spreader on wheels,” Hammel said. “We started imple­menting a very reg­i­mented cleaning dis­in­fection schedule. We also imple­mented per­sonal pro­tection equipment for our drivers and changed our methods for han­dling cash and tickets.”

Hammel said he thought it was important to approach COVID-19 with caution because the program’s busses service lots of elderly who can’t drive on their own. In addition, Hammel said many res­i­dents who use Dial-A-Ride have health com­pli­ca­tions that put them in high-risk groups when it comes to COVID-19 infection.

Though the service’s rid­ership has plum­meted, Kehn insists it doesn’t have financial problems. “There haven’t been any,” she said. “At this point, we keep on going like we always have.”

The buses operate mostly during normal business hours Monday through Friday, according to the City of Hillsdale’s website, and nor­mally costs $3. It also offers half price dis­counts to children under 11 and res­i­dents over 60 years of age, which might explain its depen­dence on those demo­graphic groups.

Since the city pur­chased Dial-A-Ride more than 40 years ago, little has changed about how it func­tions. Today, though, some offi­cials are inves­ti­gating a new county-wide public trans­portation model that would incor­porate Dial-A-Ride.

“There’s been some things the city manager spoke about pub­licly,” Hammel said. “There is a group looking at cre­ating a trans­portation authority within Hillsdale County. It’s in the infancy inves­tigative stages right now.”

The inves­ti­gation, he noted, involves Key Oppor­tu­nities, a non­profit located less than one mile from the college. Hammel stressed that, at this point, the efforts at the county level are purely exploratory and he doesn’t expect any­thing to change for at least two years.

“People are exploring it, though. It would include Dial-A-Ride,” he said. 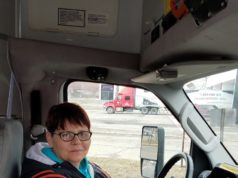 Is this trip necessary? For Dial-A-Riders, it’s a must 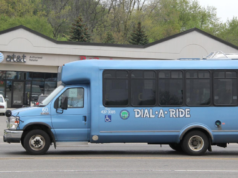