The Charger men’s track and field team will look to improve on a third place finish in last year’s G‑MAC indoor track and field cham­pi­onships. After grad­u­ating All-American Joey Humes ’20, the Chargers look to fill the spot with more depth this year.

Fifth-year senior Ryan Thomsen, who is returning to the team but will not be able to compete during the indoor season due to eli­gi­bility rules, said he hopes to fill a morale-building role on the team.

“I’m using this oppor­tunity to fire up the team and put them into a good place,” Thomsen said. “My main goals this season are staying healthy and helping team­mates with whatever they need.”

Junior John Baldwin, who set the school record for the 60m hurdles last season and is looking to set a record in the hep­tathlon, is looking to step into the role of leader of the team.

Senior Mark Miller leads the mid-dis­tance runners after placing in both the mile and 800m races in last year’s cham­pi­onship. Adam Wier also plays a vital role in the Charger’s dis­tance core, having placed third in the 5,000m at the championship.

Junior Jacob Schmidt and senior Adam Wade will return as the leading sprinters of the team. Schmidt placed sixth in the 60m dash and Wade sixth in the 400m dash at last year’s cham­pi­onship. They will fill two spots on the 4x400m relay, joined by sopho­mores Benu Meintjes and Ian Calvert. The squad placed second at the 2020 G‑MAC Indoor Championship.

The women’s track and field team is coming off a cham­pi­onship victory after winning last year’s G‑MAC Indoor Championship.

“Overall I feel like we’ve done very well preparing for this season,” junior sprinter Alanna O’Leary said. “It was hard having our last com­pe­tition in Feb­ruary and not com­peting again until December. I think it speaks to the resilience of our program that we can compete at the level that we are now after such a long break.”

Senior Kajsa Johansson and junior Nikita Maine look to prove them­selves after qual­i­fying for the NCAA Division II indoor national finals last year. The event, which was scheduled for March, was can­celled due to con­cerns regarding the COVID-19 out­break. Neither of the runners received national or all-American honors.

The mid-dis­tance and dis­tance squads for the women’s team are loaded. Senior Christina Sawyer has won back-to-back G‑MAC indoor titles in the 5,000m run. Senior Maryssa Depies placed third in the mile and 3,000m races at last year’s cham­pi­onship, while sophomore Gwynne Riley placed third in the 800m.

The Chargers offi­cially opened their 2020 – 2021 indoor season last December at the Tiffin Uni­versity Chal­lenge. Hillsdale has three home meets planned for the season, the first being the Sequential Border War on Friday, Jan. 22. The Chargers will hold their second inter­squad scrimmage of the season this Friday. 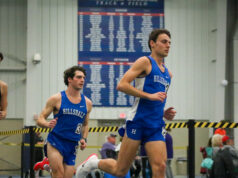 Men’s track and field earns second against Ashland and Findlay