If you ask Tori Petersen ‘18 what Bible verse guides her life, she’ll tell you it’s John 13:33 – 35, the passage about loving one another as Jesus loves us.

That passion is what inspired her to start the Fos­tering the Good schol­arship. The fund is Hillsdale College’s only schol­arship ded­i­cated to stu­dents who spent time in foster care, a system Petersen knows well.

“I grew up with a single mother diag­nosed with severe mental illness. My dad wasn’t involved in my life because I was con­ceived out of a rape, and then my dad passed away a month before I was born,” Petersen said. “Due to my mom’s mental illness, abuse, neglect, and the lack of family on either side, I went into the foster care system at 4 years old and again at 12. I lived in a dozen dif­ferent homes and remained in the foster care system until I eman­ci­pated the day I turned 18.”

In between leaving the foster care system and coming to Hillsdale, Petersen attended a dif­ferent college. But she began to feel she wasn’t growing in her faith. When her track coach was fired, she took that as a sign that things needed to change.

“I Googled ‘most reli­gious col­leges in America’ and Hillsdale came up as number two, so I emailed the track coach and told him I needed a full-ride schol­arship and told him my times,” she recalled. “I really wanted to go to Hillsdale because I wanted to be some­where I could figure out who I was in Christ and how to live that out.”

Petersen grad­uated with degrees in Christian studies and psy­chology. Now married and with a 20-month-old son and a baby girl on the way, she con­tinues to be a voice for foster children, espe­cially on social media where she seeks to spread awareness about the system.

It was her online advocacy that gave rise to a more tan­gible project: cre­ating a fund so stu­dents with back­grounds like hers could have a chance at a Hillsdale education.

“The com­munity at Hillsdale College offers vul­nerable young people a vision of what it looks like to live out the Gospel and a vision of what family should be,” Petersen said. “I saw it for myself in my pro­fessors, the admin­is­tration, and my close friends. I want every former foster youth to expe­rience that. Foster care can be iso­lating. Hillsdale College is a place where youth can expe­rience freedom in a safe way.”

She brought her idea up to Danny Drummond ’18, a friend from her college days who now works in the college’s insti­tu­tional advancement office. Drummond called it “a joy” to help Vic­toria and her husband, Jacob, create the Fos­tering the Good Scholarship.

“They had been grad­uated from Hillsdale for only a year when they reached out to me to begin work on the schol­arship,” Drummond said. “They wanted to create an endowed schol­arship, which is great because endowed schol­ar­ships are invested in the market and will never go away, if managed properly.”

But endowed schol­ar­ships require an initial gift of $50,000 — no small feat. The Petersens worked with Drummond and the college’s alumni rela­tions department to create a cam­paign to crowd-raise the amount. The effort launched in early June and quickly received a number of gifts, but by the end of the month, they still needed to raise $25,000.

Around that time, Petersen wrote an open letter to her alma mater, defending the college as some called on the insti­tution to take a stand in support of the Black Lives Matter movement. She relayed her own expe­rience as a former foster child and Black student at Hillsdale. To Petersen’s sur­prise, it went viral.

“I just wanted Dr. Arnn and some other of my favorite pro­fessors and the admin­is­tration to read it so they’d be encouraged, because the mes­sages they were receiving were hurtful even to me, mostly because they weren’t true,” she explained. “I men­tioned the Fos­tering the Good Schol­arship in that letter and thank­fully, a lot of people donated through the link.”

In fact, so many people donated that in the two to three weeks fol­lowing her letter’s release, her schol­arship received more than $35,000 in dona­tions, easily exceeding the $50,000 threshold.

“We couldn’t have pre­dicted what the letter would do to the endowed schol­arship,” Jacob Petersen said. “And that speaks to what Tori does. She sees a dark place and she wants to bring light into it. Her intention with the letter was to bring hope to hurting people. She thought about not even posting it and just sending it to some of her favorite faculty. But she wanted it to shine as much light as pos­sible. Being married to Tori is like watching one miracle after the other happen and I love it.”

Just as the Petersens were heartened by the out­pouring of support, Drummond expressed grat­itude for their efforts on behalf of the institution.

“Never does the college cease to be humbled and grateful for the remarkable gen­erosity of people around the country,” he said. “We are espe­cially grateful when our alumni seek to strengthen our com­munity beyond their student days. The Petersens are doing this, and the impact of their efforts will last for generations.”

“If you don’t know what to do, ask yourself, ‘What is the next love thing?’” she said. “And then simply do the next thing in love.” 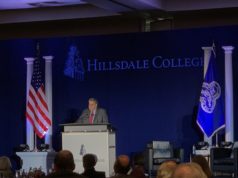 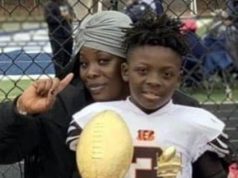