Whenever Michael Bauman, pro­fessor of the­ology and culture, looked down at his class roster, his stu­dents knew he was about to call on someone to defend a the­o­logical position. And this is how he would use much of his class time.

Bauman, 69, died on Oct. 2 of com­pli­ca­tions from a stroke he suf­fered this summer. Funeral ser­vices were held in Hillsdale on Oct. 10, offi­ciated by his col­league Thomas Burke, pro­fessor and chair of phi­losophy and religion, who also gave one of the eulogies.

Bauman’s brother, Chris, said in a message that he heard nothing but praise for Bauman from former students.

“Because he was a humble person, I had no idea that he had such an impact on thou­sands of lives,” he said. “Many people fol­lowed him from Summit Min­istries — a Christian apolo­getics con­ference — to Hillsdale, and vice versa, because he had a way of reaching them and chal­lenging them like they have never been challenged.”

Chris Bauman even said he knows of former stu­dents whose children also took classes with Bauman, and this, he said, is his legacy.

After grad­u­ating from high school, Bauman served in the U.S. Marine Corps. He studied at Trinity College and even­tually earned his Ph.D. from Fordham Uni­versity. Bauman also taught at the Uni­versity of Oxford as an asso­ciate dean with the Centre for Medieval and Renais­sance Studies.

Bauman, who also served as the director of the Christian Studies program at Hillsdale, arrived on campus in 1988 and taught courses ranging from the history of Chris­tianity to sem­inars on John Milton and C.S. Lewis. He was also the author of 20 books, as well as a blog on the­ology, pol­itics, and social issues. He was known for his method of prompting stu­dents to defend a variety of beliefs and arguments.

“Whatever the student answered, he’d chal­lenge it with the other point of view,” Burke said. “His goal was to bring the student to arrive at the truth by virtue of them seeing it for themselves.”

One of Bauman’s recent stu­dents, junior Jared Key, enjoyed this style of learning. Having taken Bauman’s Western The­o­logical Tra­dition and History of Christian Thought I courses, Key said it was Bauman who made him want to study phi­losophy and religion. As Bauman taught mostly night classes, Key said his teaching style worked better for a two-and-a-half hour class than a short lecture period.

“On the first night of Western The­o­logical Tra­dition, he pro­ceeded to explain the first four Christian councils by making us have to defend what the councils had to defend without knowing about them,” Key said. “After we all failed mis­erably to defend the divinity of Christ, he would then explain what they said.”

Joshua Klooz, ’08, took classes from Bauman. Klooz said he fondly remembers taking his C.S. Lewis seminar as an upper­classman. Bauman’s lec­tures on Lewis’ novel “Till We Have Faces” were par­tic­u­larly mem­o­rable, Klooz said.

Klooz said Bauman was one of the most honest people he knew at Hillsdale and he showed this when he was strug­gling through under­standing a text with his stu­dents. Bauman never worked from pre­pared notes, so class was always fresh, Klooz said.

“Class was combat,” he said. “You didn’t want to bring any Sunday school answer. If you gave the right answer, he’d ask why. Did you earn that answer or was it given to you?”

Klooz also said Bauman was incredibly gen­erous with his time, in and out of the classroom. When Klooz was looking at graduate school and the mil­itary, Bauman offered his advice on both.

“Time is so valuable, and you don’t run across very many people who are as gen­erous with that resource as he was,” Klooz said.

One of Bauman’s friends, Bill Lundberg, assistant pro­fessor of sports studies and Hayden Park director, said Bauman’s goal in the classroom was to get stu­dents to con­sider their thinking process. Over the years, many of Lundberg’s student ath­letes would take Bauman’s classes and he recalls sitting in on some.

“He’d say to the stu­dents, ‘Coach Lundberg is here to gain wisdom, too, just like you,’” Lundberg said.

Lundberg said Bauman’s knowledge only enhanced his Christian faith, some­thing that helped him during a series of health issues toward the end of his life.

“He was always so elo­quent and great to be with and hear him speak. He was really witty,” Lundberg said. “He was a hero for Christ.”

“Over the years, I noticed he seemed to have read every­thing,” Jordan said.

Burke said that Bauman once told him his writing habits were inspired from con­ver­sa­tions with the­ologian Alister McGrath at the Uni­versity of Oxford. When Bauman asked McGrath how he wrote so much, he responded by saying he would get up every day and write for several hours. This inspired Bauman to ded­icate himself to con­stant writing. Because of this, Burke said he ended up with a good library of pub­lished books.

Bauman was also a res­ident scholar for the Summit Semester, a spir­itual and edu­ca­tional program from Summit Min­istries held in Col­orado. In a lecture he would give at Summit, titled “Chronicle of Deception,” Bauman would tell stu­dents the story of how he came to Chris­tianity after sub­scribing to the social move­ments of the 1960s.

“I confess to believing, at one time or another, nearly all the per­sistent or per­vasive fan­tasies of the 1960s,” he said in the lecture. “If the truth be told, of course, I knew nothing — at least nothing worth knowing.”

Outside of his schol­arship, Bauman was an avid athlete. According to Lundberg, he had a back­ground in track and field, but Bauman espe­cially loved cycling. He even spent time training with a world-class cyclist in Italy, Jordan said. Bauman com­peted in a number of cycling races, often doing well for his age group. He even won the world cham­pi­onship Ultra­Ma­rathon in 2000, according to his obituary.

In the last few years of his life, Bauman dealt with a number of health issues, including strokes and bouts of cancer. In the fall of 2016, he was cycling with Lundberg and other pro­fessors when he fell and frac­tured several bones.

As a result, Bauman spent con­sid­erable time recov­ering in hos­pitals and at home. During these times, Lundberg, Jordan, Burke, and other col­leagues would visit him. Jordan and his wife would often bring meals to Bauman, and it was those times when Jordan got to know him better.

“I thought he was under­going some of the afflic­tions of Job. The number and series of calamities that came were really trying,” Jordan said. “I think that there was a stoic and Christian endurance of affliction.”

Lundberg remembers one time he went to the hos­pital and Bauman asked him to help plan an escape. While they didn’t go through with their plot, of course, Jordan said that instance showed Bauman’s char­acter of determination.

Burke said that over the years, he and Bauman would have con­ver­sa­tions on the­ology, and that Bauman showed a desire to pursue truth.

“He was very com­mitted, but at the same time, he was open-minded,” Burke said. “He changed his position on certain the­o­logical posi­tions a number of times over the years. He loved to argue because he thought that was the way to find out what’s what.” 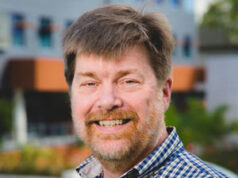 Biola professor to speak on fulfillment in Christianity 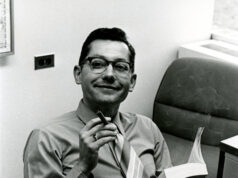