A packed room of stu­dents wel­comed poet Mark Jarman to campus both Monday and Tuesday night.

Jarman is the most recent vis­iting writer to come to Hillsdale; the Vis­iting Writer Program brings poets and fiction authors to campus twice a semester. He has pub­lished eleven col­lec­tions of poetry, won many awards including the Lenore Mar­shall Prize from the Academy of American Poets, and teaches at Van­derbilt Uni­versity. Jarman read poems from his books “Unholy Sonnets” and “Ques­tions for Eccle­si­astes” on Monday, and lec­tured about his career and gave writing advice on Tuesday.

Jarman advised stu­dents to write con­sis­tently and use their poetry to glorify God.

The poet told many stories throughout his lec­tures, but one that par­tic­u­larly stood out was a story from his childhood about his mother. Jarman recalled how he asked his mother about her prayer life. In response, she described her routine of praying while doing the dishes. “She’s praying though her eyes are open wide,” Jarman read. “She’s doing three things: watching a cloud pass, talking to God, drying a drinking glass.”

Attendees of the lec­tures reveled in Jarman’s artistry.

“Mark Jarman brought wisdom, insight, and an eye for the soul in relation to God,” said sophomore Morgan Billingsley, who attended the talk to learn from the suc­cessful poet. “His visit to Hillsdale was enriching and his words were inspiring.”

During his visit, Jarman also met with and advised mul­tiple stu­dents on their writing.

“A lot of stu­dents were able to have meals with him, do a workshop with him, and do a question and answer series,” said Dutton Kearney, director of the Vis­iting Writer Program and a pro­fessor of English. “It’s been great.”

As the new director of the program, Kearney said he was worried about how many people were going to attend the Jarman lectures.

“The room was packed both nights and he was very well received,” he said.

Kearney said that the Vis­iting Writers program is important because it allows stu­dents to engage with the brightest minds in literature.

“To have stu­dents here who live the life of a solid clas­sical edu­cation and then having a con­ver­sation with writers like Mark Jarman really enriches the edu­cation,” he said.

Stu­dents and faculty were very engaged with Jarman, asking him ques­tions after his speech and getting their books signed during the reception.

“I look forward to the next writer to come to our campus,” Billingsley said. “The program always pro­vides rich intel­lectual material to sift through what we might not oth­erwise wrestle with in our daily life.”

Jarman took note of the engagement and eagerness of the student body.

“It’s a pleasure to be around stu­dents who are so well informed,” he said. “Espe­cially about literature.” 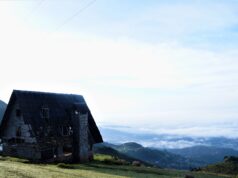 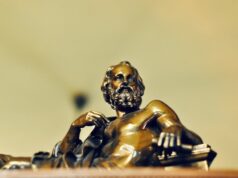