With Modern Waste’s leaf bag col­lection just a few days away on Sat­urday, Hillsdale City Council members are com­mitted to finding a solution for changes in leaf col­lection later this fall.

The council announced March 4 that they were trans­ferring leaf col­lection ser­vices from city-run pickup to Modern Waste, the new trash pickup service that the city began using this past year. This switch for leaf pickup would ulti­mately save the city about $50,000. The change, however, would require res­i­dents to place their leaves into bags, rather than just bring them to the curb as they had in pre­vious years.

Many res­i­dents reached out with con­cerns regarding bagging: the expense of the bags, the labor for the elderly and dis­abled, and the time it takes to put the leaves in the bags.

Mayor Adam Stockford said Monday that he was actively pur­suing options to address con­cerns of residents.

“My biggest concern is the elderly and the dis­abled res­i­dents we have because of the added labor of bagging the leaves,” Stockford said. “I have been solic­iting various non profits and dif­ferent char­i­table orga­ni­za­tions like A Few Good Men.”

Stockford said he was able to confirm some vol­un­teers at the Early Middle College, and that he is still in contact with A Few Good Men to try and arrange a system for leaf bagging in the community.

“The best idea I can come up with to soften the blow at this point is to try to solicit some people to help donate their time and help the elderly bag their leaves,” Stockford said.

Ward 4 Coun­cilman Matt Bell, who bagged the leaves in his yard this past weekend, noted that the new process of bagging takes a lot more time than bringing the leaves to the curb.

“If we do have a process that takes people more time, rather than blowing the leaves to the curb, they have put it in their bags, we have to give them more time,” Bell said. “So for the fall we have to keep that in mind.”

“It’s nuts,” he said. “We need at this point to find some way to have one curb pickup in the fall, somehow.”

Hillsdale’s compost site at Water­works Avenue is no longer able to collect leaves and such yard waste because of require­ments from Michigan’s Department of Envi­ron­mental Quality that would cost the city to build a new compost facility. This forced the city to find another means of dumping the col­lecting leaves. By out­sourcing the leaf col­lection to Modern Waste, they elim­i­nated the need to build the new compost facility.

Bell said that bagging is not the best solution and that council should con­tinue seeking other options.

“Per­sonally, I think I made a mistake voting for that and I don’t know what the options are because obvi­ously we can’t run the compost facility anymore, but there’s got to be another way,” Bell said. “We’ve got to figure it out. We have to have at least one curb pickup — there’s too many leaves.”

City Manager David Mackie said that the $50,000 being saved by switching to Modern Waste for leaf pickup is being put toward the roads.

“I want to be real clear that the savings from this are actually allowing us to put more into the roads,” Mackie said.

These funds will now allow the city to address road and storm sewer con­cerns as they prepare for next winter, he said.

“When we talk about savings, there is savings, but also we’re not really truly seeing savings, it is just being better uti­lized in a high pri­ority that the city has iden­tified as the roads,” Mackie said. 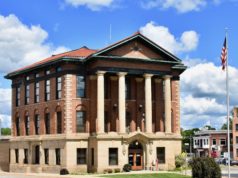