Crawford is a pub­lished author of a soon-to-be trilogy called “The Chron­icles of Skyy.” The first book in the emerging fantasy series “Origins” pub­lished earlier this year is just over 200 pages long and centers on the magic-filled adven­tures of three members of opposing tribes on the island of Farithius. The book can be pur­chased on Amazon as a paperback or ebook.

Crawford got her start in writing as early as ele­mentary school, espe­cially after getting involved with a writing club at her local library in Atlanta, Georgia.

She attributes her incli­nation to write to her “over­active imag­i­nation,” explaining, “I just started to tell stories to myself, and even­tually they got written down.”

In addition to her time spent writing, Crawford is also a member of the college’s chapter of the American Chemical Society, pep band, and the pre-vet­erinary club.

Crawford said she never wrote from a plot outline, but relied instead on spon­ta­neous creativity.

Crawford said her favorite part of the writing process is cre­ating the characters.

“It’s fun to watch char­acters develop as the story moves on. I became somewhat attached to them.”

Crawford said bal­ancing writing with her aca­demic workload was chal­lenging, and that she would spend hours working on her story over weekends to make up for the time lost during the school week.

Crawford said her decision to write a fantasy book was inspired by what she read as a child, including the “Harry Potter” books, but her char­acters were inspired by her friends in real life.

Writing, Crawford explained, is an outlet that allows her to view the world in a new way.

“I wrote my book for me,” she said. “I wanted to put the story in my head down on paper. Once I realized people were fully intrigued by my writing, I decided to take it further. The book is for anyone who wants an adventure.”

Crawford’s novel has drawn praise from a few readers. One Amazon user wrote a review in August, saying the book is “a great example of how being a young writer does not equal infe­ri­ority to older writers. The beginning of ‘Origins’ can seem a little con­fusing, but once you learn the terms and char­acters, it becomes a very inter­esting story in a real­is­ti­cally-crafted world. The plot moves quickly and draws the reader in.”

Crawford’s close friend Kiersten Flannery was one of the first to read her book outside Crawford’s family and said she appre­ciated Crawford’s “unique writing style” and char­acter devel­opment throughout the novel.

Another of Crawford’s friends, Matthew Colquitt from Uni­versity of Georgia, com­mended her work.

“I thor­oughly enjoyed the book because it was very cre­ative and intel­li­gently written,” she said.

For the future, Crawford says she plans to con­tinue writing as a hobby, “at the very least.” That said, she’s not sure it’s some­thing she’d want to pursue solely as a career.

For “The Chron­icles of Skyy” trilogy, the second and third books in the series “have even more char­acters pulled into the story with lots of twists and turns,” Crawford said. “There’s def­i­nitely more danger and sus­pense to come.” 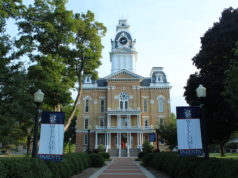 That for which we stand: Remember Hillsdale’s tradition