Over 240 people will gather Thursday evening to cel­e­brate the work of Catholic Char­ities in local Jackson, Lenawee, and Hillsdale counties to raise funds for general operations.

The dinner will take place at 6:30 p.m. and is being held at Gene Davis and Sons Banquet Hall, which is next to the Catholic Char­ities Jackson office.

“The St. Teresa of Cal­cutta Giving Society is our group of most loyal donors who pledge to give $500 or more for 5 years or more,” Cuth­bertson said. “The dona­tions are pretty critical to help us expand and sustain pro­grams we have in place.”

“Our ser­vices in the three counties touch foster care children, those in prison, home­bound, and many others who are not able to care for them­selves,” Busch said. “The mission of Catholic Char­ities is to ensure that those around us are served well, regardless of the return we receive from them.”

In addition to raising funds, the dinner plays an essential role in keeping the com­munity informed about the ser­vices offered by Catholic Charities.

“The dinner is a way of getting the info out to people in the counties and helping them realize the impor­tance of what we do,” Cuth­bertson said.

Last year, Rev. Tim Mac­Donald and Rev. Joe Krupp hosted the event. Both of them will be hosting the event again this year. Mac­Donald said in an interview on the Bart Hawley Show, this year’s dinner will feature a bit more humor.

“It’s going to be a mix of comedy and inspi­ration. Last year was a little serious about the Mother Teresa Society and my expe­rience of working with Mother Teresa and meeting her in Cal­cutta in 1997 shortly before her death,” Mac­Donald said. “This year is going to be more the leavity people would expect when Fr. Joe and I are together.”

Last year’s dinner had 250 attendees and a waiting list. While the vast majority of these attendees comes from the three serving counties, Cuth­bertson said there were a couple of people in atten­dance from outside those three counties.

The dinner will high­light infor­mation about spe­cific ser­vices and programs.

“We will have tes­ti­mo­nials from clients of several of our pro­grams and hear sta­tistics on the number of people we serve in our three counties,” Cuth­bertson said.

Dan Bishop, who is a board member for Catholic Char­ities, said in the same interview on the Bart Hawley Show that the event will be a great oppor­tunity to hear about how Catholic Char­ities has a pos­itive impact on the community.

“This will just be a ter­rific night,” Bishop said. “It will be a real family night, just to hear some inspiring stories and feel good about work that’s being done, but so much more work needs to be done with these dif­ferent hurting people that are out there.” 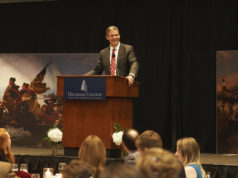 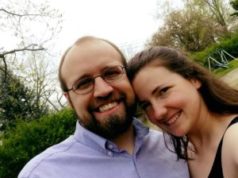 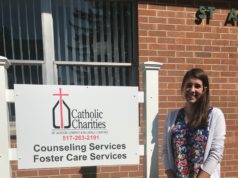