A woman drenched in blood staggers into view, screaming about her blown-off arm. A soldier assaults a young girl, per­ma­nently scarring her face with a dark red gash. Bodies lie strewn across the stage as a fife and drum chorus plays cheerily in the background.

Jarring war scenes and bloody deaths con­front the audience of the Tower Players’ pro­duction of Bertolt Brecht’s “Mother Courage and her Children,” which opened last night in Markel Audi­torium. The pro­duction, directed by Pro­fessor of Theatre James Brandon, suc­cess­fully com­bines classic Brechtian alien­ation tech­niques with unique aes­thetic ele­ments that help the audience relate the play to their own lives.

The story, set during the 30 Years’ War, follows the wartime wan­derings of peasant Anna Fierling, or “Mother Courage,” as she, her three children, and an assortment of com­panions drag a cart across Poland, Germany, and Bavaria, ped­dling stolen goods and food to the sol­diers, singing for their supper, and switching their alle­giances between Catholics and Lutherans to suit whatever company they find them­selves in.

“The most chal­lenging aspect of her char­acter is that she is all of us,” said senior Catherine Coffey, who stars as Mother Courage. “She’s lovable at times but then you see her doing these hor­rendous things, and it’s so hard to admit that I couldn’t do any­thing dif­ferent in her position. It’s dif­ficult to treat her as a human being and not as a caricature.”

In the spirit of Brechtian epische theater, the set design is minimal, fea­turing little more than a pro­jection screen, some sparse fur­niture, and scaf­folding. The sound oper­ators sit in plain view on stage, a choice that helps keep the audience from ever for­getting the arti­fi­ciality of the play.

“The sort of open set, the revealing of the oper­ators and stuff, that’s very Brechtian,” Brandon said. “Calling attention to the fact that you’re sitting in the theater.”

The barren design also forces the audience to notice the one thing onstage that doesn’t change: Mother Courage’s cart. For the audience, the cart even­tually becomes a per­manent fixture of the play. As the char­acters develop an almost emo­tional attachment to it, so does the audience. As a result, when the cart is almost destroyed during the play, or rolled off­stage in the final scene, the audience expe­ri­ences a jolt of loss.

Other fea­tures  sim­i­larly jolt the audience, forcing its members to realize the rel­e­vance of the play to their own lives. The stage floor is a montage of pres­i­dential cam­paign posters and dec­la­ra­tions of war from America’s history, and in-between each scene, a screen plays a clip from the recent pres­i­dential race: Chris Christie calling for a no-fly zone in Syria or Donald Trump com­plaining about ISIS.

“We’re tying it into the 2016 election,” Brandon said. “Brecht wanted you to take the play and think about the world you’re living in right now. So for him, the play was World War II.”

Brecht used the images of the 30 Years’ War, a holo­caust for Germany in its day, to comment in 1945 on the Holo­caust of World War II. Likewise, the audience today is encouraged to con­sider the holo­causts that might come in our own time — as ISIS wages war in Syria and Iraq and our politi­cians remain at war with one another over what to do about it.

Yet, amid the dire warnings of war and the often inhuman actions of the char­acters, the cast of “Mother Courage” suc­ceeds in pep­pering the per­for­mance with tender moments of humanity that achieve fleeting audience sym­pathy. Sophomore Mark Naida as Eilif touch­ingly embraces his mother after a two-year sep­a­ration; senior Faith Liu as Mother Courage’s mute daughter Kattrin shyly admires her feet in a pair of red boots; and Coffey as Mother Courage herself vehe­mently refuses to abandon her daughter for the sake of a business venture — all moments of true con­nection and com­passion in the midst of the war that inspire real emo­tional reac­tions from the audience, fleeting though those moments may be.

“This par­ticular play is about the aspects of Mother Courage that we all share,” Coffey said. “And so I decided to focus on those and watch people — focus on the way people treat earthly pos­ses­sions versus other people. I watched mothers and children, just to sort of see how they interact. It was much more char­acter research than dra­matur­gical research.”

The show runs through Sunday in Markel Audi­torium, with per­for­mances every night at 8 p.m. and a matinee on Sunday at 2 p.m. 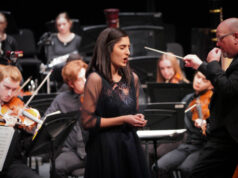 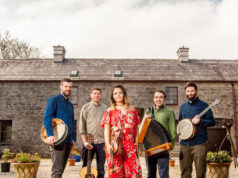