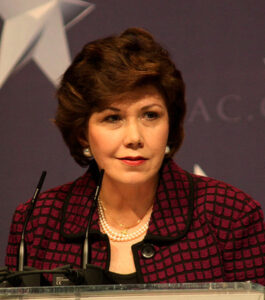 After Linda Chavez served as the highest-ranking woman in Pres­ident Ronald Reagan’s White House working as the Director of Public Liaison, she decided to use her knowledge of policy in writing. Chavez is now a political com­men­tator who writes a weekly syn­di­cated column and often appears on Fox News and radio shows as an analyst. She is also the founder of the Center for Equal Oppor­tunity. Soon, she will finish her first series of fic­tional short stories.

At one point, you con­sidered becoming a college pro­fessor. Why did you stop pur­suing that career?

I started college in 1965, married in 1967, and had my first kid in 1968, so I was a student, a wife, and a mother. I had to work through school and this was also the time when affir­mative action was starting.

I got involved with recruiting stu­dents, specif­i­cally Mexican-Amer­icans. It was clear that these kids did not have the aca­demic back­ground to be pre­pared for college. Even though English was spoken in their homes, they were not pro­fi­cient in standard English, so I decided that I would try to con­vince the English Department to let me teach a course to help incoming stu­dents. They let me do that, which is how I got started teaching.

Unfor­tu­nately, this was the time when affir­mative action, in my mind, went off the rails. Instead of just being about giving kids who did not have oppor­tu­nities the chance to learn skills, it became a program that was basi­cally all about dividing stu­dents into ethnic classes. I really had a clash and then left and went on to graduate school at UCLA.… They were changing the rules so minority stu­dents were not expected to abide by the same rules and was really a low­ering of stan­dards. That’s when I left.

My whole back­ground was in lit­er­ature, so I’m sort of self taught. I decided to read “Wealth of Nations” in the late 70s. I was working for a labor union, and some things didn’t make sense to me. I said, ‘This doesn’t seem to be the way the world works,’ and so I decided to read Adam Smith, and it was like on the first page I thought, ‘This is the way the world works. This makes sense.’ So by the time I went into the Reagan White House, I was on my way to being a free market cap­i­talist. And, I was earning more and real­izing the gov­ernment was taking a big chunk of my money and not spending it exactly how I thought it should.

Your husband changed his political views, too. What influ­enced him?

My husband was a Socialist — in a more European Socialism way. He was anti-Com­munist, but believed the state ought to pay for things.

We were strug­gling stu­dents, and he wanted to buy a color tele­vision set, and he sud­denly noticed that instead of how under Marxist theory a color tele­vision would always be out of the reach of the working class because cap­i­talists would be greedy and keep pushing prices up so every­thing would always be out of reach, he started noticing that prices were getting cheaper every year. It was like this was his wake up call. I always tease him that if we weren’t so inter­ested in sports that he wanted a color tele­vision that he may be a Bernie Sanders guy now.

Despite having three children early on in your career, you accom­plished a lot. What is your advice for young adults who want to pursue having both careers and families?

In Wash­ington, I found that people spend a lot of time at work that is unnec­essary. They would be hanging out or just trying to get face time with the boss — I saw that a lot at the White House. I got there very early, but I left at 6 or 6:30 every day. A lot of others worked until 8:30 or 9 p.m., but they were mostly sitting around gabbing and talking.

It’s a chal­lenge to balance both, though. I know a lot of people decided to wait to have kids. I’m actually not sure that’s the best advice. I know people who had children early and then went back to the workforce.

I also respect women who go to college and get liberal arts degrees and then spend time raising their children. It’s a very worthy aspi­ration. Edu­cation is never wasted. And you can use it in devel­oping your children.

One reason women, on average, earn less than men with equal edu­ca­tions is that women take time out for children. That will make a dif­ference. To me, it’s not a bad trade off.

I was able to balance both.