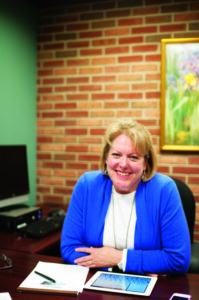 Ginni Thomas is an entre­preneur and activist in the Wash­ington, D.C., area. She has worked at The Her­itage Foun­dation, the U.S. Chamber of Com­merce, and in numerous leg­islative and exec­utive offices. After working as an asso­ciate vice pres­ident of Hillsdale College to establish the Allan P. Kirby Jr., Center for Con­sti­tu­tional Studies and Cit­i­zenship, she founded the pow­er­house non-profit Liberty Central as an infor­mation hub for citizen activists. She visited Hillsdale College this week to orient upcoming interns on the inter­section of prin­ciple and practice in Washington.

SO: How did your rela­tionship with Hillsdale College begin?

GT: [Pres­ident] Larry Arnn and Penny Arnn are friends to my husband and me from when they were at Claremont. We’ve known them a long time and were excited when [Dr. Arnn] had the oppor­tunity to start here about 12 years ago. We admire what his work has always been, and we are really excited about what he’s brought to Hillsdale. I came back and com­pli­mented him on the changes that are hap­pening, the goodness that is hap­pening here. You can see it archi­tec­turally and that means that devel­opment is going well. And kids are just thriving and growing and learning.

SO: What was your first involvement with the college?

GT: Dr. Arnn asked me to join the Board [of Trustees], which I did for four years. I loved inter­acting with them, but I told him that if he was inter­ested in starting some­thing in Wash­ington, I could help him more as a full-time staffer than on his board. I was getting more out of it than I was giving to the school. I loved helping them full time to establish a presence in Wash­ington. When the Tea Party came in Sep­tember 2009, I looked out and saw these people. These are my people and I really con­nected with them. I love the mission of the school, but I really felt like the calling right now was to come to the service of the country in a more imme­diate, political way than in what Hillsdale was doing in a long-term aca­demic way. I had to leave to start up my own political entre­pre­neurial website. And I loved doing that. I used the con­nec­tions and the ideas that I found here at Hillsdale.

SO: Could you tell me about your series with The Daily Caller?

GT: Tucker Carlson and Neil Patel run The Daily Caller, so it’s a fun, fun group of people. They talked with me about coming over. I video interview people who give hope and inspi­ration to the center right. It’s a lot of fun. What I try to do is give air time to someone on the center right who I think is a leader and showing courage and prin­ciple in the Wash­ington area. We are getting more and more traffic. It’s just a fun way to provide hope and inspi­ration to the right.

SO: Who are some of the people that you espe­cially enjoyed meeting and interviewing?

GT: Well, I have to say Andrew Bre­itbart. I aired it two weeks before he passed away. I just did Mark Steyn this morning. One that I really loved was Rev­erend C.L. Bryant, who was a former NAACP leader who became so Tea Party-esque that the black elites in the church that he was with took his church away from him. He had a pow­erful tale. He also has a movie coming out called “Runaway Slave” in June. It is a story about how many in the black com­munity and the left can be deceived and ensconced in gov­ernment depen­dency and not find the richness of inde­pen­dence and entre­pre­neurship and self-reliance. I love his movie and I loved his interview. Marco Rubio; Jim DeMint; Ann Coulter is always fun. I’m just blessed by all the people I’ve gotten to talk to.

SO: Do you have any favorite ques­tions to ask them, or one that you ask everyone?

GT: I have started asking everyone what it is that gives them hope. You can so easily get bogged down in the problems, yet one of the main pur­poses of my inter­views is to give hope to the people out there who are engaged in the battle. It can get dis­cour­aging, so I want to put out hopeful mes­sages. It’s been fas­ci­nating to ask that question … I just love being blown away by coura­geous and prin­cipled people in Wash­ington. They are few and far between.

SO: What is your vision for the future and for what you can do as a citizen of this country? What do you hope to accomplish?

GT: I am a political entre­preneur and a cat­alyst. I nudge people that I know in power towards prin­ciple, con­viction and boldness because I think we’re in des­perate straits. Prac­ti­cally, I think you can be more engaged. Any of us from any place on this map can be engaged locally with your school board, with gath­ering people to learn about the Con­sti­tution in their homes. I really do believe that it’s the local grass­roots movement that’s going to save this country, and I don’t think anyone in Wash­ington will do that. I know that we need a change in Wash­ington, and I hope that whoever it is, we can affect from the outside. We have to build a cit­i­zenry that is informed and active more than relying on leaders.