In a campus-wide email on Monday, Hillsdale College announced that Tom Conner, pro­fessor of history, will give the Class of 2020 com­mencement address on the rescheduled date of Sat­urday, July 18. He replaces Judge Amy Coney Barrett, who is unable to attend the new date.

Conner was the William P. Harris Chair in Mil­itary History at Hillsdale College and a mainstay of the history department for 37 years. He held various admin­is­trative posi­tions in addition to his teaching duties, including dean of social sci­ences, dean of faculty, and department chairman. He also served as advisor to a fra­ternity. He was voted Hillsdale College Pro­fessor of the Year four times and was named one of Princeton Review’s “Best 300 Pro­fessors” in 2012.

“There were several people the officers had in mind, but we all came to the con­clusion of reaching out to Doc,” Buchmann said in an email. “He was one of the most highly requested speakers coming into the year from a senior class survey, and nobody knows the school and the impor­tance of senior year and com­mencement like Doc Conner.”

“Tom Conner is dearly beloved by our stu­dents,” VanOrman said in a press release. “I’m very pleased that he will send them off, and con­clude his Hillsdale College career, in such a mean­ingful way.”

For Conner, the invi­tation was “one of the biggest sur­prises of my life, and cer­tainly one of the highest honors.”

“After the shock,” Conner wrote in an email, “the first emo­tions I felt were grat­itude — to Pres­ident Arnn, to the Class officers, and to the Trustees — and humility in the face of the mag­nitude of the chal­lenge, and in view of the countless others more gifted and capable than I whom they could have asked.”

Conner explained that the timing of the oppor­tunity makes it espe­cially mean­ingful.

“Once I announced that this would be my last year of full-time teaching, I have felt a special kinship with this year’s seniors, since we have gone through our final aca­demic year together,” he said. “None of us could have guessed three months ago how dif­ferent, and riddled with dis­ap­point­ments, this ‘senior year’ would be.”

In his speech, Conner said he hopes to address some of these dis­ap­point­ments and the chal­lenges the Class of 2020 faces grad­u­ating into a poor economy and dis­rupted future. The topic of his speech will be, “The World Hasn’t Changed.”

“I will be trying to help the grad­uates see the current crisis in per­spective, and also to deliver a strong message of encour­agement to them as they embark upon the next phases of their lives,” Conner said. 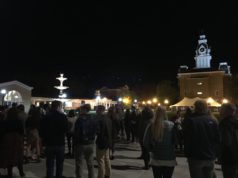 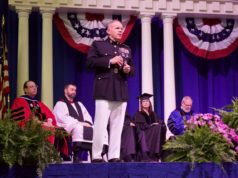