It’s not every day an Olympian comes to campus, but on Sat­urday, Hillsdale College wel­comed six of them.

Rich Péwé, chief admin­is­trative officer, said the part­nership is a natural fit because Hillsdale College and USA Shooting share similar values. Both are keen on pro­moting shooting sports and the prin­ciples it enforces.

“We’re excited to do some­thing with USA Shooting because we believe shooting develops good char­acter: it requires ethics and learning good habits,” Péwé said. “We want people to be respon­sible and rise to self gov­ernment. USA Shooting pro­motes char­acter and sport through shooting sports.”

They joined college guests at the Halter Shooting Sports Edu­cation Center to shoot sporting clays, skeet, and bunker trap, and later had dinner at Pres­ident Arnn’s res­i­dence, Broadlawn. Hats, ath­letic tops, and other mer­chandise bearing the Hillsdale College and USA Shooting logos were dis­played in the range’s AcuSport Lodge.

Waldron, a former Olympic shooter, coor­di­nates ath­letes’ schedules, including com­pe­ti­tions and appear­ances. She travels with the team to ensure ath­letes have access to nutrition, physical therapy, and other resources that enable them to maintain peak per­for­mance.

According to Péwé, the John Athony Halter Shooting Sports Edu­cation Center is one of the nicest com­pre­hensive ranges in the nation. But Hillsdale College plans to add four com­bi­nation bunker trap and skeet fields to allow the range to host bigger com­pe­ti­tions, such as the World Shooting Grand Prix and national Olympic events.

The college also intends to con­struct a building that will contain indoor pistol, rifle, and air gun and archery ranges to expand oppor­tu­nities for high school and college stu­dents.

Bart Spieth has been Hillsdale College’s shooting sports coor­di­nator since 2009 and helped guide the estab­lishment of its current facil­ities. He recalled that all the range had to offer when he started was one trap field and a porta-potty, and said he now looks forward to enhancing its offerings by building facil­ities for more spe­cialized shooting sports.

“I’ve been blessed to be in shooting sports for a long time and under­stand how they work together,” he said.

Shotgun Team Captain Lucas Pier­accini said the orga­ni­za­tional skills and mental dis­ci­pline he developed from shooting sports are applicable to many facets of life, and antic­i­pates the planned expan­sions will enable more stu­dents to learn from shooting sports.

“I sin­cerely hope that the part­nership does well, because it will be great for stu­dents,” he said. 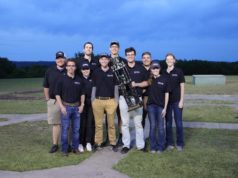 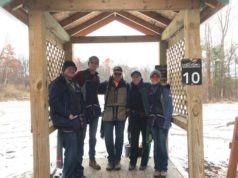