Hillsdale College’s Christ Chapel will not be fin­ished in time for com­mencement in May of 2019, Pres­ident Larry Arnn recently announced. The chapel is expected to be fin­ished two months later.

“It’s not a very serious delay,” Arnn said. “There’s a lot of masonry work, and the masons who can do this quality of work are limited. Buildings never seem to be early, and with ones like this, if they’re 10 percent late, that’s pretty good. It won’t be done before the seniors go away. That’s the only thing I don’t like about it.”

But Arnn said he still hopes to bring seniors and fam­ilies into the unfin­ished chapel, during com­mencement week.

“I said to Mark, who is the boss on the site, ‘So what if I want to find a way to bring several hundred people in here for some­thing?’ And he said, ‘We’ll find a way,’” Arnn said.

Don Lambert, super­in­tendent of masonry on the chapel project, said the early winter took a toll on the chapel’s progress since the mortar between the brick and lime­stone is water-based. However, he said the delay rests in the “quality and com­plexity” demanded by the job.

“The college is spending a lot more money on quality than quantity. Anyone can lay a lot of block real fast and bomb up a wall, but if it’s wrong, it throws off the whole building,” Lambert said. “Every­thing mounts off the masonry. If you try to rush some­thing, every­thing can go south real quick.”

Mark Shol­len­berger, super­in­tendent of con­struction, said a shortage of laborers also pre­vented the chapel from fin­ishing on time. He said the company lacks around 60 brick­layers, a trade that he said seems to have a shortage of nec­essary labor.

With the masonry 99 percent fin­ished on the interior, Lambert said the outdoor stonework is more than 70 percent complete.

“We have left to put the dome, and the arcades,” Lambert said. For brick­laying, he said they are “at 54 feet on the south gable wall facing the clock tower, and we only have 12 feet to go on the towers themselves.”

Shol­len­berger said the ceiling is the most pressing unfin­ished project.

“You have to schedule every­thing around the ceiling. You have to get every­thing done up high and get down to a level where you don’t have those lifts in the building anymore,” Shol­len­berger said. “Once we finish getting the plaster and drywall done on the ceiling, we can start priming and painting the stair­wells so we can begin the flooring.”

“Don doesn’t get all pan­icked, so we don’t have to get pan­icked. We shouldn’t get so bound up in a sit­u­ation that we can’t control,” Clark said. “When things aren’t right on track, I’ve learned to be meek and keep giving all the glory to God.”

Aside from “going back to church” and starting to read books on the Con­sti­tution, Clark said this job is the biggest project he’s done in America.

“When there is a greater good to be served, it doesn’t matter how tough the job is. It’s an hon­orable thing to do. It’s help me stay humble. I feel like Job some­times. There’s so much power and glory in God, that when I remain calm and quiet, and my ego doesn’t get in the way, I get to see it. It’s just a beau­tiful job,” Clark said.

Bruce Malpass, a con­struction worker on site, said this is an incredibly intricate project.

“I’ve been in con­struction for 30 years, and I’ve never seen any­thing built like this before,” he said. “They tell me these are the largest load-bearing lime­stone columns in the nation. I’ve never seen a barrel ceiling like this. Maybe in Europe.”

To the senior class who won’t be having their com­mencement cer­emony in the chapel, Arnn assures that there will be many other occasions.

“Come back and get married in it,” Arnn said. “Come back and see it. Par­tic­ipate. You’re members of the college for life. It’s always there for you to use.” 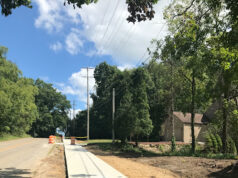